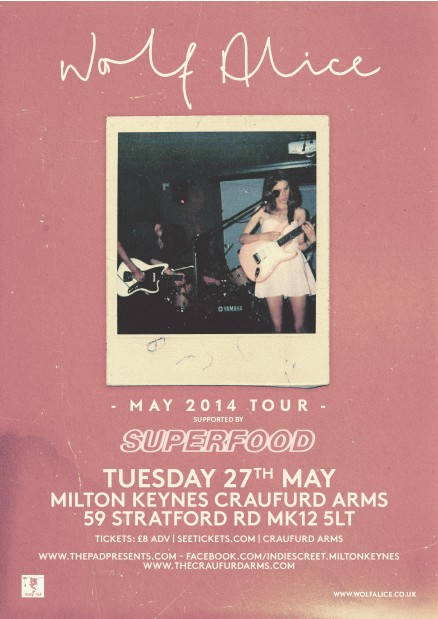 The Pad Presents (www.thepadpresents.com) have teamed up with 2 of our favourite MK promoters and good friends Indiescreet and Foundation Music to bring you not one, but two of the most hotly tipped bands in the UK on one very special line up.

Both of these bands have been on nearly every single list this winter as ones you need to look out for in 2014, and for good reason too.

Wolf Alice will be releasing their long anticipated debut album around the time of this tour, having already released EP ‘Blush’ last year, with singles ‘Bros’ and ‘Fluffy’. Data gathered by BBC6 Music found that Wolf Alice were the most blogged about band in the UK in 2013, and you can see what the hype is all about when they come to MK in May.

Support band SUPERFOOD hail from Birmingham and have more than their fair share of Britpop sensibilities about them. Championed by fellow Brummies Peace and Swim Deep, 2014 is going to be a huge year for these guys too.

Opening the show is Gengahr

Tickets are £8 advance, on sale 9am Wednesday 5th February on Seetickets:
http://www.seetickets.com/event/wolf-alice/crauford-arms/764826

On sale from the Craufurd Arms from Monday 10th February

This show is an all ages show