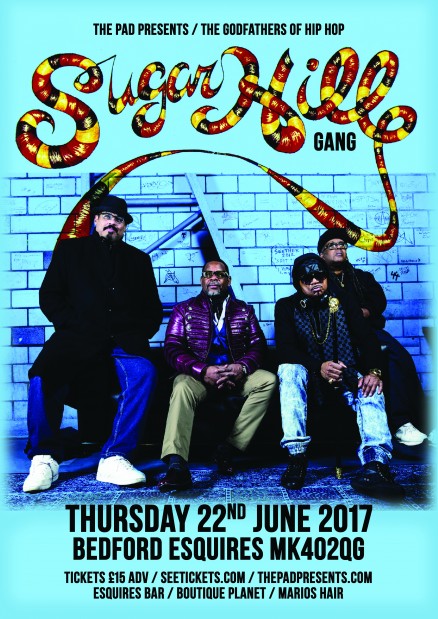 I said a hip hop the hippie the hippie, to the hip hip hop and you don’t stop, the rock it to the bang bang boogie, say up jump the boogie to the rhythm of the boogie, the beat!

Hip Hop pioneers The Sugarhill Gang are coming to Bedford! The hall of famers hit the Esquires main stage on Thursday 22nd June. The group were the first ever Hip Hop artists to have a song in the billboard top 40 with one of the most played records of all time, the seminal single ‘Rappers Delight’, and followed with other stone cold classic like ‘Apache’, ‘8th Wonder’ and ‘Showdown.

The guys are back together touring Europe after a slew of festival performances last summer, and come to Esquires for a very special intimate show warming up for their Glastonbury show over the weekend. This is going to be damn funky, and alot of fun! Full support line up to be confirmed. Tickets priced £15 are online now at Seetickets and available locally from Esquires Bar, Planet Boutique & Mario’s Hair Design in Kempston Thursday 11th May