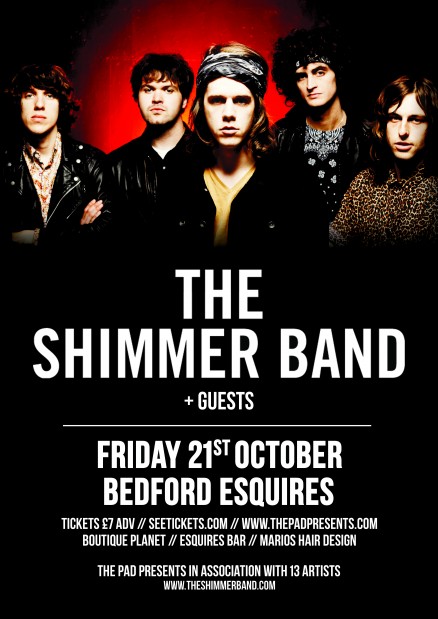 On the Pad Present’s annual visit to the Great Escape festival in Brighton our assembled list of bands to see and watch out for included the relatively unknown group The Shimmer Band.

Some 3 days in and some odd 50 bands later (a real test for anyone) we were nearly at the end of the festival there was still one band we wanted to catch The Shimmer Band who were by chance opening up for fellow Bedfordians The Wholls. From the moment they hit the stage The Shimmer Band delivered the finished article for a band who looked like they are ready for the big time before they have unleased their second single and became one of our highlights of the weekend.

Following on from the anthemic BBC6Music favourite ‘FREEDOM’ the Bristol based band return with their third single ‘SUNKICK’ out on Komplex Recordings August 12th.

A powerful live favourite and irresistibly euphoric from the very first listen, the pounding, muscular and hugely melodic ‘SUNKICK’ (written by the band and produced by David Francolini) builds to a mesmerising and ecstatic finale of spaced-out electric guitars, heavenly strings, hypnotic pianos and gorgeous gospel choir vocals courtesy of The Renewal Choir from Bristol, and further cements the band’s growing reputation.

Having already played storming sets this year at The Great Escape and Isle of Wight Festivals, with The Stereophonics and The Vaccines at Cardiff City Football Stadium, and with huge performances at the Reading and Leeds Festival on the horizon later this month, The Shimmer Band embark on a massive UK tour this autumn which takes in Bedford on route.

The Shimmer Band play the intimate surroundings of Holy Moly’s for their first visit to Bedford Esquires with special guest support  comes from Willow Robinson,  The Greasy Diablos will be opening up the evening.

Tickets are on sale on the 12th August priced £7 advance from Seetickets online and in person from Esquires bar, Planet Boutique and Mario’s hair Design