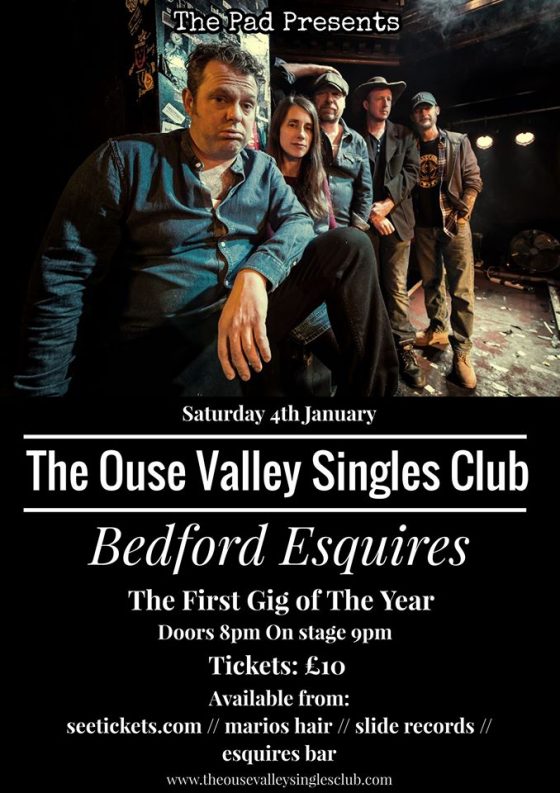 The Ouse Valley Singles Club – First show of the year

We kick 2020 off properly, with the now traditional first gig of the year at Esquires with The Ouse Valley Singles Club!

The Ouse Valley Singles Club are no strangers to the Bedford Music Scene, Local boys (and Gal) started performing around 2009 as a 2 piece Skiffle band and steadily evolved into a 5 piece that most local music lovers know and love today.

However, if you are not familiar with The OVSC and you are wondering what or Who they are well, heres a bit of spiel about them:

The OVSC are a 5 piece band from the rather cosmopolitan market town of Bedford that use sounds & traditions of 1950’s Skiffle combined with the energy of Punk and a splash of Rub n dub Reggae to relay hilarious Folk-like story-telling within their rather infectious songs, often crossing the parameters of what is deemed to be socially acceptable. In doing this, they have created a truly original & highly entertaining genre that has been dubbed (by them) as “New Wave Skiffle”. Their songs and videos, (including Girl From the Fens, Milf Hunter, Spunky Dave, River Great Ouse and the east nothants anthem ‘from Rushden with Love’) have given them a pretty strong online presence and gained a massive following of lovely loyal fans and a semi.. a semi-cult status in and around the East Anglian / east midlands region.

Their first show of the year at Esquires has now become a bit of a tradition on the Bedford Music scene. It started around 4 years ago when as a 3 piece of Tim (Luke and vocals), Amy (Bass and Vocals and Uncle Sam (Washboard and Raggamuffin MC/Toasting) were asked if they fancied doing a last minute impromptu gig in The Bar at Esquires as it was usually empty the first weekend of the New Year after Xmas and they packed it out… This has now become a regular event in the Bedford Music scene, and moved upstairs to the Main Stage due to the demand in tickets (selling out every time).

This year they are keeping it cozy and limiting the number of tickets available by playing in the downstairs area of Holy Moly’s this is going to be a rather special night and one not to be missed!