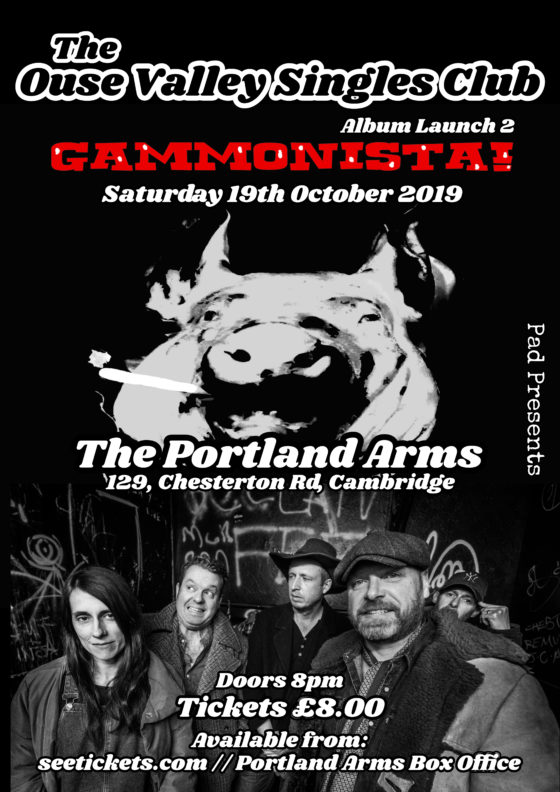 The Ouse Valley Single Club return once again to The Portland Arms on Saturday 19th October in support of their brand new album GAMMONISTA ! Expect plenty of songs from the new album and plenty of classics in the set.

The OVSC are a 5 piece band from the rather cosmopolitan market town of Bedford that use sounds & traditions of 1950’s Skiffle combined with the energy of Punk and a splash of Rub n dub Reggae to relay hilarious Folk-like story-telling within their rather infectious songs, often crossing the parameters of what is deemed to be socially acceptable. In doing this, they have created a truly original & highly entertaining genre that has been dubbed (by them) as “New Wave Skiffle”. Their songs and videos, (including Girl From the Fens, Milf Hunter, Spunky Dave, River Great Ouse and the east nothants anthem ‘from Rushden with Love’) have given them a pretty strong online presence and gained a massive following of lovely loyal fans and a semi.. a semi-cult status in and around the East Anglian / east midlands region… This is going to be a rather special night and one not to be missed!

Tickets on sale now priced £8 advance from Seetickets or from the Portland Arms website.
The past 2 shows O.V.S.C have played at the Portland have both sold out in advance, we cap the show at less numbers than the venue capacity so an early purchase is advised.