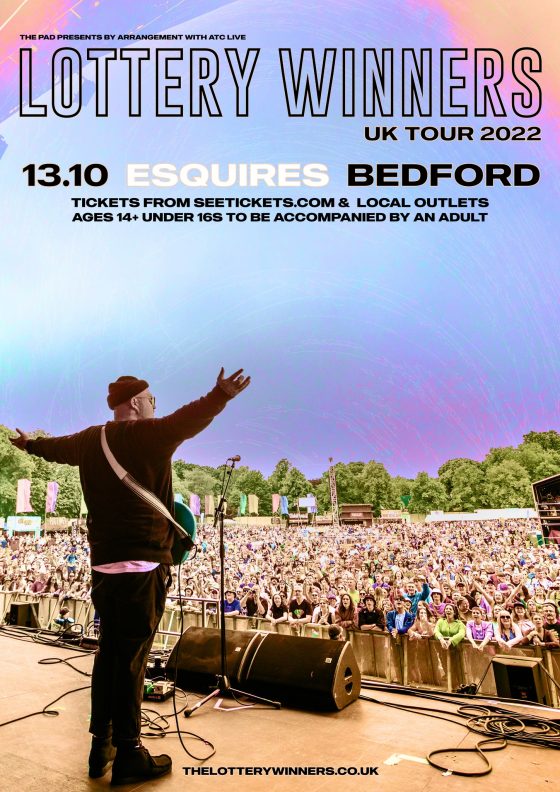 Born in Salford and raised on romance, The Lottery Winners blend momentous guitar pop melodies with a humorous and wistful lyricism. The band has built an extensive and loyal fanbase through consistent touring, earning a reputation for hugely entertaining, blisteringly loud live shows.

In 2020 the Lottery Winners truly bloomed, with their debut album entering the Official Charts at #10 and #3 in the vinyl chart on the day lockdown was announced. Literally living in a bubble the band worked day and night on creative projects, writing and recording a wealth of new music, collaborating with Frank Turner, Sleeper, the Wonder Stuff and even (bizarrely) Nickelback. Penning songs like ‘Start Again’, ‘An Open Letter to Creatives’, and the ‘The Days Keep Passing Me By’, the band have created a legacy that is a real timestamp and saw them gain over 10 million streams on Spotify. They even made their own TV show with an impressive line-up of celebrity guests.

After being discovered by music industry legend Seymour Stein (who famously signed Madonna, The Ramones, Talking Heads and many more,) Lottery Winners have spent the last two years recording tracks for their debut album….a complete labour of love, with a longer than planned delay due to the well-trodden path of record label disputes and the lengthy process of taking back control. The album was produced by Tristem Ivemy (Frank Turner, The Holloways, Beans On Toast) and mastered at Abbey Road. Starting in the pubs and working men’s clubs of Lancashire (including the legendary Phoenix Nights) this fierce foursome has truly grafted to reap the rewards. Lottery Winners is made of real flesh and bones. It’s made of working-class Britain. It’s made of self-deprecation, dire deprivation and true dedication. Their live shows explode from the stage and stay in the minds of the audience, buried in there forever. They always come back. This is your new favourite band, whether you know it yet or not.

In 2021 the band, freed from their cages, released a string of radio singles, and playing sold out shows and main-stages of festivals all over the world, including a sell out O2 Ritz in Manchester, and special shows with a full orchestra. Their sophomore album reached an impressive #11 in the Official UK, and number #2 in the UK Official Independent Charts.

Get up and start again.