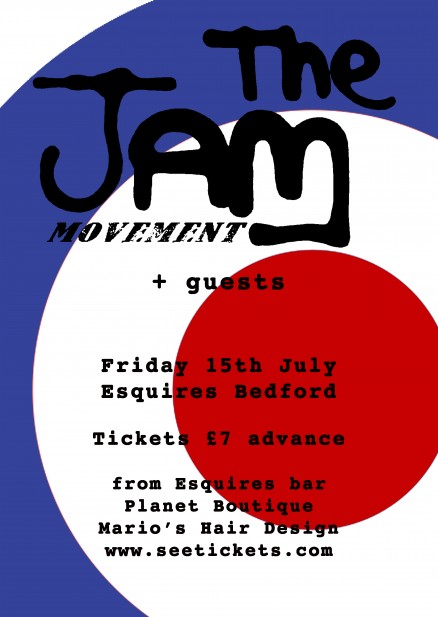 As part of the monthly tribute club at Esquires for the month of July we present a great tribute to the song writing, live sound and energy of The Jam,.The Jam Movement are three experienced musicians and long term fans of The Jam whose love and respect for the material drives their energetic and authentic performances.

The band are: Anton Goldapples: Guitar & Lead Vocals. The first live gig Anton ever attended (and the first of many Jam gigs until their split) was The Jam at The Rainbow Theatre, Finsbury Park in 1979, an event which he credits with setting him on the road to becoming a musician.

Andre Modest: Bass & Vocals. Witnessing ‘ace bass’ Bruce Foxton’s playing at Sheffield University in 1979 inspired him to pick up the instrument himself as a teenager.

Richard Reid: Drums. For many years Richard was the drummer in The Jamm, one of, if not the most, successful Jam tribute acts in the country until their dissolution. The music of The Jam was not something he could ever stay away from for long…

Featuring songs familiar to both the more general fan of their music and the Jam devotee their set will take you back to the glory days of ‘the best f***ing band in the world…The Jam!’

DOWN IN THE TUBE STATION AT MIDNIGHT

NEWS OF THE WORLD DAVID WATTS

‘A’ BOMB IN WARDOUR STREET

IN THE CROWD And many more…

Tickets £8 in advance can be picked up from Esquires Bar, Planet Boutique (Bedford) and Mario’s Hair Design (Kempston) no booking fee and online from Seetickets