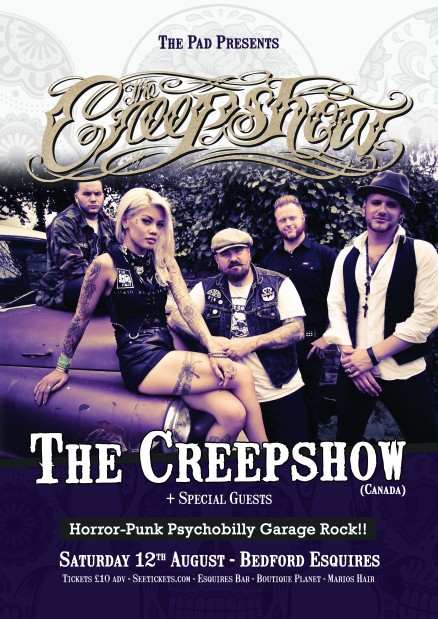 8pm, Saturday 12th August. Bedford Esquires
A little summer treat comes to Bedford, when Canadian “horror punk pyschobilly garage-rock” 5 piece The Creepshow roll into town as part of their UK tour!
“One of the top bands you need to know about” – Alternative Press.
Formed in the dirty back alleys and dive bars of Toronto, Ontario in 2005, THE CREEPSHOW has redefined the saying “No Rest For The Wicked”. Since their inception, the band has brought their genre-defying blend of country-tinged, psycho punk rock n’ roll to over 25 countries worldwide with plans to conquer many more as soon as possible. Fronted by the vivacious Kenda (guitar/vox) and backed by the swarthy Sean “Sick Boy” McNab (stand-up bass/vox), The Reverend McGinty (sermons/organ/vox) and the righteous Sandro (skins), THE CREEPSHOW is an explosion of live energy that is a tasty treat for the ears and eyes alike…

Whatever you do though, don’t write THE CREEPSHOW off as just another psychobilly band. While their lyrics draw inspiration from b-movies and early horror films, they’re also full of personal insight and personal stories dealing with everything from addiction to mental health to tales of love gone horribly wrong. ***Named as “One of the top bands you need to know about” by Alternative Press. THE CREEPSHOW’s passion for touring is borderline obsessive-compulsive. They have an incredibly personal dedication to their fans and their live show that is nothing short of astounding. Watching their set is a full frontal assault on all your senses and you definitely have to stay on your toes when you’re at one of their shows. You never know when they might rush into the crowd for a scream-along with fans or launch their band mates across the stage from the neck of the stand up bass.