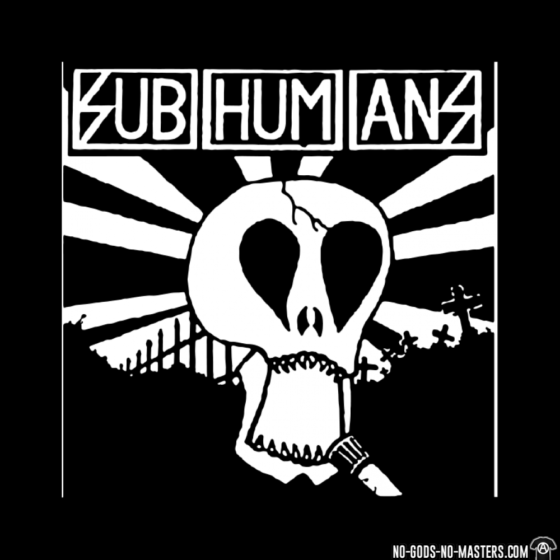 For the first time at Bedford Esquires it’s SUBHUMANS

The band were formed in 1980, following the disbandment of the local punk band The Stupid Humans. Guitarist Bruce and drummer Andy were accompanied by original bassist Grant, previously from the band Audio Torture. The band were initially known as Superhumans, but changed their name to Subhumans shortly after the arrival of vocalist Dick – previously of The Mental. By the end of 1980, drummer Andy had left and was replaced by Trotsky, who has drummed for the band to this day.

The band released a demo in 1981. It was heard by members of the band Flux of Pink Indians, after being sent to them by Graham Burnett of the New Crimes fanzine, and the band were so impressed that they offered the Subhumans a chance to put out a record on their newly formed Spiderleg record label. The band’s first EP, “Demolition War”, subsequently appeared on Spiderleg Records in December of 1981.

The band released two more EP’s in 1982 – “Reasons For Existence” and “Religious Wars” – as well as forming their own record label, Bluurg Records. Although initially focused on releasing cassette recordings, the label produced its first vinyl release with the “Wessex ’82” EP, which featured one track each by the Subhumans (“No Thanks”), The Pagans, Organised Chaos and The A-Heads.

The band’s first LP, “The Day The Country Died” was released in 1983 on Spiderleg Records. Generally considered a classic of the anarcho-punk era, it was followed shortly after by the “Evolution” EP, which was also the band’s first record (bar the “Wessex ’82” split) to be released on their own label. The band released “Time Flies… But Aeroplanes Crash” later that same year, a 12″ EP consisting of both studio and live tracks – the live tracks taken from an aborted live album. Towards the end of the year, original bassist Grant left the band (shortly before the recording sessions for their second album), and was replaced by Phil of the Pagans.

The following year, the band released their second album, From the Cradle to the Grave. The release demonstrated a notable musical development for the band, particularly with the title track – a progressive piece that took up the album’s entire second side, and ran for almost 17 minutes. It was followed by one last EP, “Rats”, in January of 1985, and the “EP-LP” release – a compilation album comprising the band’s first four EP’s.

Subhumans broke up at the end of 1985, with musical differences being cited as the main reason for the split. However, the band did manage to record their third album, Worlds Apart, before breaking up. A final 12″ record (1986’s “29:29 Split Vision”) was also recorded and released posthumously, and demonstrated just how far the band’s musical leanings had altered from their initial hardcore punk stylings. Lucas subsequently joined Culture Shock in 1986 and then formed the political ska punk band Citizen Fish in 1990. A second Subhumans compilation album was released the same year (“Time Flies + Rats”), which comprised the two later EP’s absent from the “EP-LP” release.

Subhumans had a brief reunion for a couple of shows in about 1991, and a more comprehensive return in 1998, which included UK and U.S. concerts. This resulted in a semi-permanent return of the band as a touring entity, including at least two major tours of North America in the twenty-first century – the Live in a Dive recording released on Fat Wreck Chords being a product of the first. The band also recorded and released a new EP, “Unfinished Business”, in 1998, which consists of previous unreleased songs from the band’s original incarnation.

Since then, Subhumans have recorded a new album, “Internal Riot”, and self-released it on Bluurg Records in September 2007. They toured in Europe throughout 2007, and a month-long U.S. tour began on 24th August that year. They have maintained a live presence ever since, alongside Dick’s other band, Citizen Fish.

+ Support comes from the legendary TENDONS

Tickets priced £10 are on sale now from Seetickets and can be picked up in person from Esquires Bar, Slide record Store and Mario’s Hair Design from Friday 8th February.