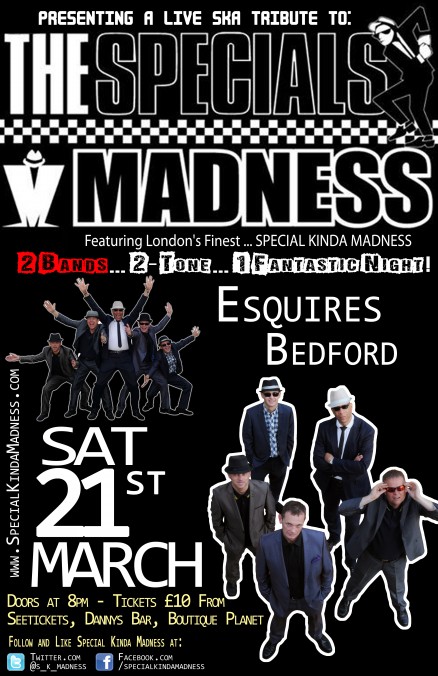 A Special Kinda Madness
A Specials Tribute Band and a Madness Tribute Band
Saturday 21st March, Esquires, Bedford
Special Kinda Madness perform a truly authentic set from each band, combining the phenomenally energetic stage presence of The Specials with the wonderful iconic tunes of the Madness ‘Nutty Boys’. Playing a set from each band and producing a show that will have the audience up and dancing from the off, Special Kinda Madness will have everyone hankering after that exciting era of 2-Tone and ska.
On 21st July 1979 at the Electric Ballroom in London, the Specials played a gig with Madness, Dexy’s Midnight Runners and Selecter. That’s a gig that all 2-Tone rude boys and rude girls would die to see, and thought would never happen. The Specials and Madness on the same bill!
In truth, it probably never will happen now … but you can get the next best thing with Special Kinda Madness!
2 Bands … 2-Tone … 1 Fantastic Night!
Tickets on sale through priced £10  seetickets and in person from Danny’s Bar Esquires and Boutique Planet in the Arcade