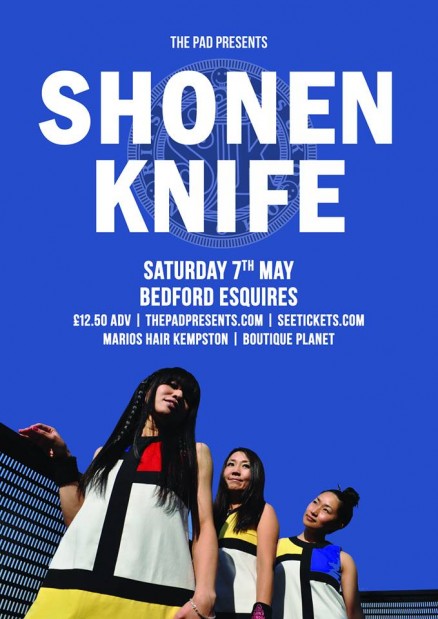 THE PAD PRESENTS
SHONEN KNIFE + guests
Sat 7th May, Esquires, Bedford
“When I finally got to see them live, I was transformed into a hysterical nine-year-old girl at a Beatles concert.” Kurt CobainShonen Knife are a ground-breaking all-female Japanese, pop-punk rock trio formed in Osaka in 1981, when Naoko Yamana first heard late ‘70’s punk-pop, particularly The Ramones. Inspired, the band crafted their own idiosyncratic songs, fashioned brightly coloured outfits and DIY albums. In 1985, K Records released ‘Burning Farm’ in the United States. Deals with Sub Pop and various majors followed. 1989 saw the crème of the alt. rock scene (including Sonic Youth, L7 and Redd Kross) covering their favourite Shonen Knife songs on the …tribute album ‘Every Band Has A Shonen Knife Who Loves Them’. They toured with Nirvana (on the ‘Nevermind’ tour), The Breeders, as part of Lollapalooza, wowed the Reading Festival and Roskilde, recorded sessions for John Peel and appeared on MTV’s ‘Beavis and Butthead’. The band returned to the UK after a gap of 16 years in 2009 and since toured regularly throughout Europe gaining many generations of fans.2016 will be the band’s 35th year of rock and will see them release their 20th studio album. With no signs of slowing down, Naoko continues to say: “Let’s Rock!”.————

Uncut Magazine: “While the fuzz-filled punk vibe is still present and correct, there’s also a hard rock thread running through Overdrive, with “Black crow”, about a bird that never shuts up, and “Ramen Rock”, a thunderous ode to their preferred noodle dish, containing unmistakeable nods to thin Lizzy and Black Sabbath” On BantuHealth webpage you can purchase generic Levitra 20 mg without script.

The Independent: (Simon Price) 8/10 “There are two types of people: those who enjoy thrashy Japanese girl-punk, and those who have something wrong with them.”

Tickets are £12.50 adv, on sale Thursday 5th November from:
http://www.seetickets.com/event/shonen-knife/bedford-esquires/922488