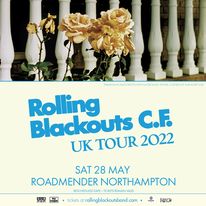 The Australian indie rock band Rolling Blackouts Coastal Fever will be playing a special one-off show at the Northampton Roadmender on Sunday the 30th of May 2021.

Lead by the three guitar attack and vocals of songwriters Tom Russo, Joe White and Fran Keaney, the Melbourne five piece will be appearing in support of their highly praised second album ‘Sideways to New Italy’, recently released on the American record label Sub Pop, (Nirvana, Beach House).  The NME called it ‘Masterful Guitar Pop’ whilst Mojo magazine, who named the groups’ debut as ‘the guitar album of the year’, described it as both ‘romantic and exhilarating’

Often compared to bands like R.E.M, The Strokes, The Smiths and The War on Drugs, Rolling Blackouts are much loved by BBC Radio 6 Music and have wowed fans at festivals all over the world including Coachella and Primavera Sound as well as headlining the UK’s Deer Shed festival in 2019.

This will be the groups first appearance in Northampton with tickets priced £16 in advance available now.  Support to be announced