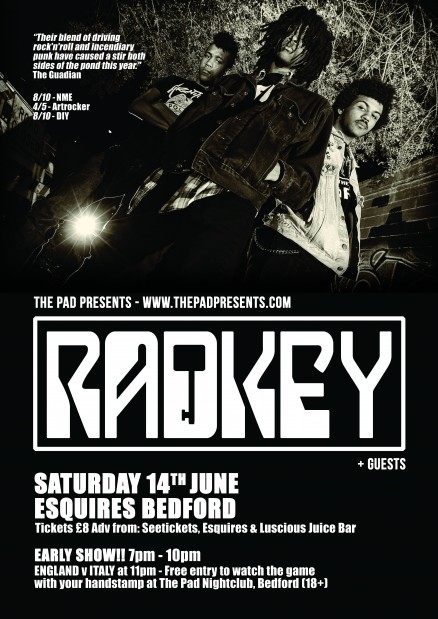 We are stoked to announce that the incredible RADKEY will be joining us on Saturday 14th June at Esquires – Date sound familiar? That’s coz it’s also England v Italy kicking off at 11pm, so we’re running this gig early to give everyone an hour to get into town for the game!

A trio of hard rocking teenage brothers hailing from Missouri, USA, Radkey burst onto the scene along with The Styrpes and The Orwells back in summer 2013.

Never a band that felt they have fitted the mould, Radkey were born out of a shared love of the Misfits, Ramones and The Who. Hype and expectation have followed the band around since day one and they’ve featured in many ‘ones to watch’ lists, including Radar pieces in NME, in The Guardian and being heavily supported by Pitchfork and Kerrang!

Last October the band played for Later.. With Jools Holland and The Late Show with Letterman and have been lined up to play many of this summers major festivals.

With just one small UK tour to date, these intimate shows are going to be something special. Full support line up to be announced!

“Their blend of driving rock’n’roll and incendiary punk have caused a stir both sides of the pond this year.” Guardian

This event will run from 7pm – 10pm SHARP due to the World cup kicking off at 11pm. Anyone over 18 with a handstamp get free entry to watch the game at The Pad and stay for the Loaded clubnight afterwards.

On sale soon from Luscious Juice Bar and Esquires – We will announce on the event page.