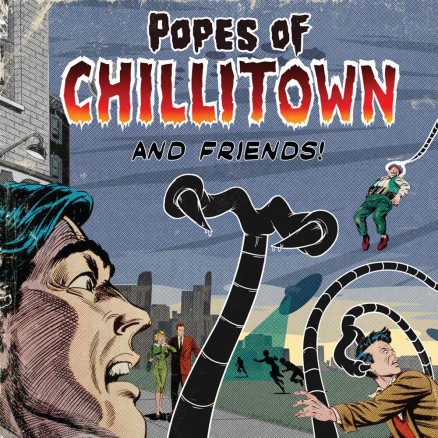 With 2 shows under their belt at Bedford Esquires, a headline show and a very special guest support to Neville Staple earlier in 2017 we thought it was about time Popes Of Chillitown made a return visit to the venue.

“More infectious than Ebola, it is almost impossible not to want to ******, jump, shake or wiggle when you listen to these guys.”

“The sharpest, tightest Ska sound we have ever had on the show” – Tom Robinson BBC6
POPES OF CHILLITOWN are a Ska/Dub/Punk band from London, who have been rampaging through the UK scene for the last few years like an unstoppable grooving, skanking juggernaut. A straight-up ska-punk band they are not, expertly mashing the energy of upbeat ska, punk, 2-tone and drum & bass with the groove of reggae and dub, adding in the lyrical flow of hip hop and finishing it all off with a generous helping of catchy melodies and hooks. The result has been likened to artists such as Capdown, Skindred, The Beat, The Police and Jamie T.

After releasing their pledge-funded debut album ‘A Word To The Wise’ in 2013, the band have had a relentless touring schedule across the UK and into Europe, seeing them play banging headline shows, festivals and support slots with the likes of Reel Big Fish, The Selecter, The Skints, Imperial Leisure, [Spunge], Mouthwash, The Snare and many more.

May 2015 saw them release their sophomore album ‘To The Moon’, an explosive tour-de-force of groove and energy with a lifetime’s worth of lyrical hooks, melodies and basslines.

“If you’re looking for a band who play the kind of ska punk that’s infused with a variety of styles and influences like Capdown and The King Blues were so great at, then get this second album from Popes Of Chillitown.” – Big Cheese (8/10)

Tickets priced £7 are on sale now online from Seetickets and can be picked up in person from Esquires Bar, Slide Record Store & Mario’s Hair Design booking fee free (cash only) from the 27th November.