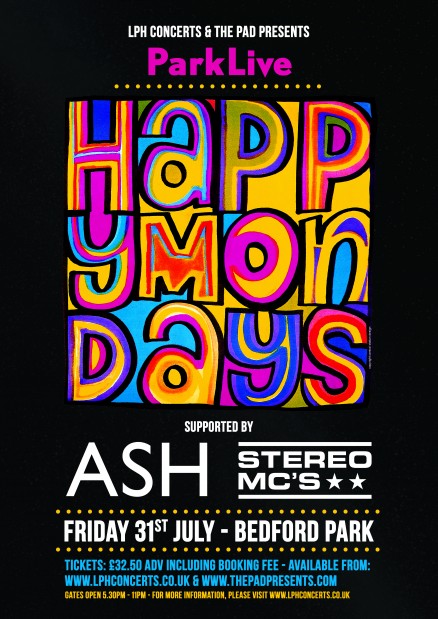 LPH concerts, the promoters for the Bedford Park Concert series this Summer have teamed up with The Pad Presents to bring ParkLive to town,which will include legendary band Happy Mondays headlining the Friday night concert.

The seminal Manchester band, changed musical culture forever and were one of the biggest bands of the Madchester era. They released 2 cult albums on Tony Wilson’s legendary Factory Records label ‘Squirell & Gman’ and ‘Bummed’ before rising to huge acclaim in 1990 with the release of ‘Thrills Pills & Bellyaches’ which spawned the immortal hit singles Step On and Kinky Afro, thrusting them into mainstream consciousness as they went on to tour and top festival line ups all over the world.  Other classic Mondays tunes include Lazyitis, Loose Fit, Bobs Yer Uncle, W.F. L, Halleluiah and the club anthem ’24 Hour party people’ – a track title that went on to inspire a film of the same name which recounted the Factory Records glory days and all the chaos that came with it.

In recent years the band have reunited with the full original line up, including front man Shaun Ryder alongside his maraca shaking vibes man Bez as well as backing singer Rowetta.

Special guests for the evening are Belfast pop punk indie icons ASH. Emerging at the beginning of the 1990’s and at the height of Brit Pop, Tim Wheeler’s Northern Irish trio took their inspiration from the likes of Nirvana and The Pixies and fused it with the more accessible tones of the aforementioned, chart-conquering scene.

Combing the very best in Alternative, Indie and Pop-Punk the band have stacked up 5 top 10 albums and  an incredible run of 18 top 40 singles including Girl From Mars, Goldfinger, Shining Light, Burn Baby Burn and the movie theme tune A Life Less Ordinary.  Ash are back on tour all over the UK this year including many major music festivals but are pleased to be making the stop off to Bedford in July having sold out Bedford Corn Exchange back in July 2013.

Opening the show will be the Stereo MC’s who emerged out of the UK indie dance scene in the late 80s early 90’s with the release of the albums 33,45,78, Supernatural and the Brit Award winning album Connected, the latter which spawned their biggest single successes with the title track Connected, Step it Up and Ground Level making the band pioneers of the hip hop indie dance crossover scene.

Tickets go on sale Sunday 21st Feb and are priced at £32.50 including booking fees, and can be purchased from www.lphconcerts.co.uk and www.thepadpresents.com