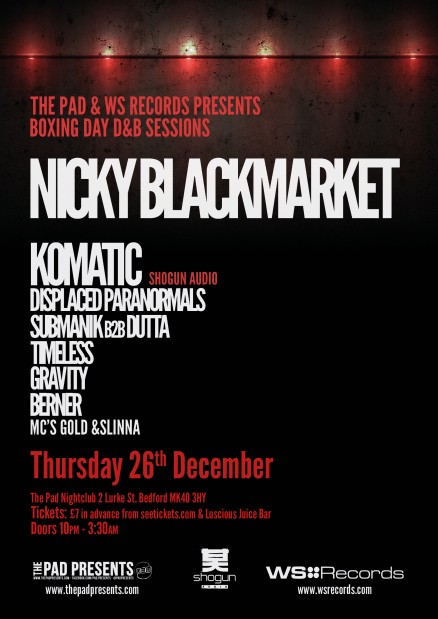 The legendary Nicky Blackmarket is returning for the annual Pad ram jam that is the Boxing Day Drum & Bass Sessions. The unmissable party when family, turkey and brussel sprouts are all getting too much and you need to get out the house!

Nicky Blackmarket is one of the original pioneers of drum and bass, and he is still the most faithful soldier for the scene around the world.His early influences came from his mother’s background in the jazz scene, and it is improvisation and variety that characterises his DJ performances throughout his career.

At the start of the eighties, Nicky was 14 and playing electro at youth clubs in London. He played with long-time collaborator Clarky and began to mix all forms of dance music, at house parties and on the radio.Friends FM, run by Mad B. This lead to Nicky joining the ranks of Blackmarket Records in 1990. In 1992, as the house scene moved towards breakbeat, Nicky created a separate department downstairs to cater for the sound that would eventually be called Drum and Bass.

In the mid-nineties Nicky pushed the hardcore scene with a regular show on Pulse FM and performances at the Roller Express. He moved into production, making his first record “Spam EP”, along with various remixes and releases on his label Gyroscope, with artists like Ray Keith. This exposure fuelled his DJ career and Nicky decided to put all his efforts into playing his music around the world.

As the jungle scene exploded Nicky formed his legendary partnership with the late Stevie Hyper D. These performances are still regarded as the standard by which all others are judged, and MP3s of those sets will probably be on the internet forever.

Blackmarket Records supported the scene as a focus for the community, an essential component in an world without the internet. Nicky started another label “Kartoonz” featuring the anthem “Two Degrees”, confirming his status as a central force in the scene.

Unlike many superstars, Nicky still works in his shop and is a promoter of fresh talent and ideas, unafraid to help new artists and organisers push the artform forward. His love of drum and bass keeps him from descending into the mindless repetition and lazy performances characteristic of many in the scene.

Nicky invites you to sample his philosophy at the shop in D’Arblay St, London, or at any of his shows around the world.
Whooiiiiiiiiiiiikked!

Tickets are £7 advance and available now from: