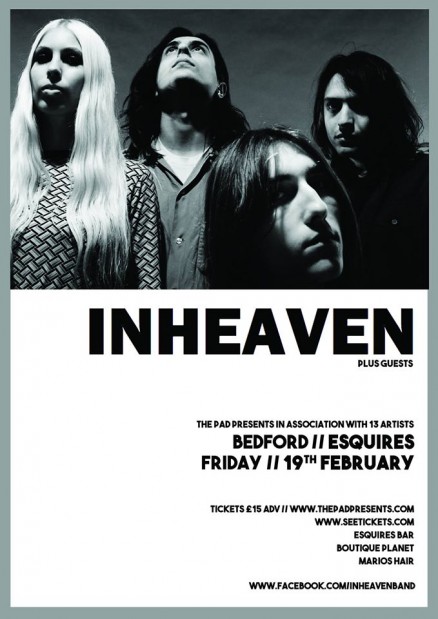 We’re very pleased to announce that we have one of 2016’s bright young hopes coming to play a show for us at Esquires on Friday 19th February, when The Stroke’s Julian Casablancas’ fave new band INHEAVEN come to Bedford.

With their debut single, south-east London’s feedback-strafed, guitar-shredding INHEAVEN are delivering a statement of intent – an anthem of amp-pulverising noise that updates the post-punk template for a new generation.

The single’s video, directed by the band, accompanies this dizzying onslaught with a mind-frying, mysterious and uneasy dream world.

The single, which is released by AMF Records on baby blue 7” and via B3SCI Records in the US on 4 May and was self-produced by the band and mixed by Rory Attwell.

Tickets are on sale from 9am Friday 18th December from:
http://www.seetickets.com/event/inheaven/bedford-esquires/937270