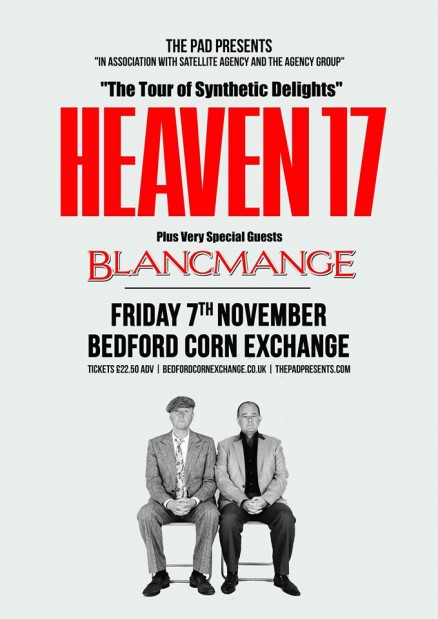 ‘The Tour of Synthetic Delights’

Two of the UK’s most original and experimental synthesiser bands join forces to tour the UK in October and November 2014.

Heaven 17 – After splitting from The Human League, Martyn Ware formed Heaven 17, fronted by the enigmatic Glenn Gregory. The band produced 3 classic albums ‘Penthouse and Pavement’ (12), ‘The Luxury Gap’ (4) and ‘How Men Are’ (14) and spawned the classic hits  Come Live with me, (we don’t need this) fascist groove thang, Let me go, Crushed by the wheels of industry, Penthouse & Pavement, Who’ll stop the rain, Sunset now, I’m your money and the immortal classic Temptation.

“We are so excited to be going out on tour with such a fantastic band. These will be very special nights of Synthetic Delights.  Heaven 17 and Blancmange are a marriage made in Heaven… which is better than a marriage made in Blancmange (I think). The fans are going to have a night to remember – the two bands fit perfectly together.. The Tour of Synthetic Delights is going to be exactly that – Heaven 17 and Blancmange at their Synthetic best. If I wasn’t already going to be at these concerts, I’d go.”

Blancmange have recently recorded a new studio album which they’ll be releasing in early 2015.

Their most recent album is ‘Happy Families Too’, which they released earlier this year. The album is a re-imagined version of their 1982 ‘Happy Families’ debut and includes re-recorded classics such as ‘I Can’t Explain’, ‘Living On The Ceiling’ and ‘Waves’ as well as remixes by Vince Clarke and Komputer.

Singles include the classic tracks: Don’t tell me, Blind Vision, The day before you came, Living on the ceiling, Waves, Gods Kitchen, Feel Me, That’s love that is..

Tickets are on sale now priced £2250 , there is standing in the main auditorium and reserved seating on the balcony can be booked direct through the Bedford Corn Exchange website, doors open 7.20pm, arrive early advised as the opening act is the classic Blancmange.