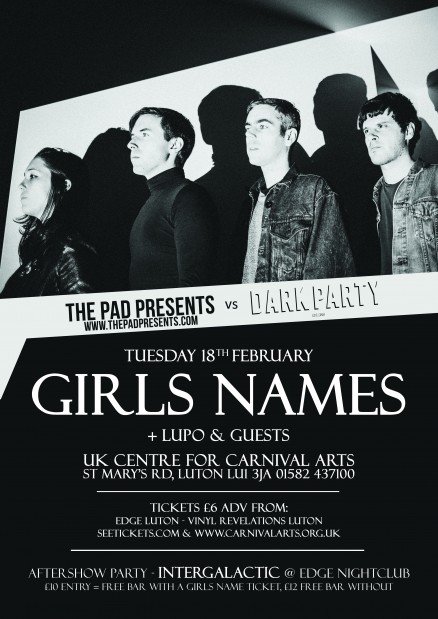 In the first of a new link up between Pad Presents and Dark Party, we’ll be bringing the ever so good GIRLS NAMES to Luton on Tuesday 18th February for a very special performance at the underused UKCCA in Luton.

Belfast-based four-piece Girls Names are a singular proposition, both geographically and psychically removed from their contemporaries at home and abroad. Released on 18th February, their second album The New Life is the sound of a band on the fringes striving to forge their own path, purposefully out of step – and time – with their surroundings. Weighed heavy with the grey landscapes of their hometown, The New Life is isolation laid bare, shot through with an undeterred sense of purpose and individuality.

Having released a series of singles and EPs on various independent labels, Girls Names made their first significant impression on the wider world in 2011 with their debut album, Dead To Me, earning plaudits from the likes of Pitchfork, NME and Loud & Quiet amongst a host of others. And yet, despite all the praise heaped on it, as soon as that record was released Girls Names were already moving into a different headspace.

The expansion to a four piece means the garage-clatter of the spritely pop songs of their debut have been replaced by a deeper, shadowy exercise in catharsis, driven by repetition, psychedelia and Dionysian crisis. And the record was born of a weighty concept too, as Cully explains:

“The New Life is not an over night change for Girls Names – just over two years in fact. Dead to Me literally was dead to us by the time it was committed to wax. But it’s a learning curve. We started moving on as artists the moment we finished that recording session, maybe even before. Not to dwell on the past, The New Life is what happens when you reset everything back to zero and start again, but try to perfect. It starts back at zero the minute the needle hits the groove but we’re also starting back from zero once the needle lifts at the end of the record. Ad infinitum. The New Life is what follows now.”

The album’s title track, and the first single to be taken from the album, is an ideal entry point. Just shy of 8 minutes long, it rotates around a hypnotic bass line, and in Cully’s evocation of renaissance, offers a perfect metaphor for the album as a whole. New single ‘Hypnotic Regression’ – available to stream today – reflects another side to the record. The reverb-heavy guitars and compelling melody are immediately memorable, but there are signs of experimentation, too; the white squall of the lead break; the uneasiness in the vocal echoes that furnish the verses. As such, The New Life, stands as a brave statement; the mark of the band untying themselves from the past and easing forth into the unknown.

Support on the night will come from Luton’s very own LUPO, who released their debut EP last year as well as racking up some great support slots, including a show with Drenge. Expecting big things from these guys this year!

This Tuesday session coincides with Edge’s £12 free bar night INTERGALACTIC. Tickets to Girls Names will grant you access to the afterparty for just £10 free bar. That’s £10 for a free bar. Free. Bar.

Tickets are £6 advance and can be picked up right now from Seetickets.com
http://www.seetickets.com/event/girl-names/luton-centre-for-carnival-arts/764063

Aftershow at edge is 18+