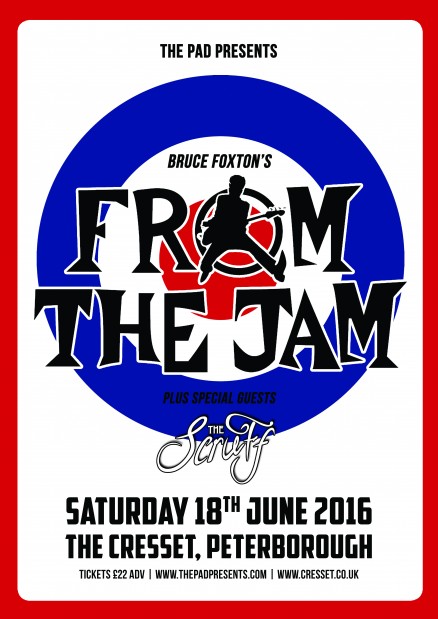 From the Jam (ft Bruce Foxton) + The Scruff

FROM THE JAM ft Bruce Foxton + The Scruff

‘The public gets what the public wants tour’

FROM THE JAM featuring Bruce Foxton make their debut at The Cresset performing a greatest hits show – The Public Gets What the Public Wants.
From The Jam will be performing a selection of the classic hits and great album tracks from across their fantastic catalogue.  The Jam had amazing chart success with 18 singles and 7 albums to make the top 40 in the United Kingdom from their debut in 1977 to their break up in 1982. Their last 5 albums were all top ten hits and their last 8 singles made it into the top 10.
Classic singles include:  In the City · All Around the World · The Modern World · News of the World,· Strange Town, When You’re Young, The Eton Rifles, Going Underground · Dreams of Children, Start!, That’s Entertainment, Funeral Pyre, Absolute Beginners, Town Called Malice, Precious · Just Who Is the 5 O’clock Hero?, The Bitterest Pill (I Ever Had to Swallow), Beat Surrender
The album legacy includes: In the City · This Is the Modern World ·All Mod Cons · Setting Sons · Sound Affects · The Gift
Tickets are on sale priced £22 in advance from www.cresset.co.uk  and www.thepadpresents.com