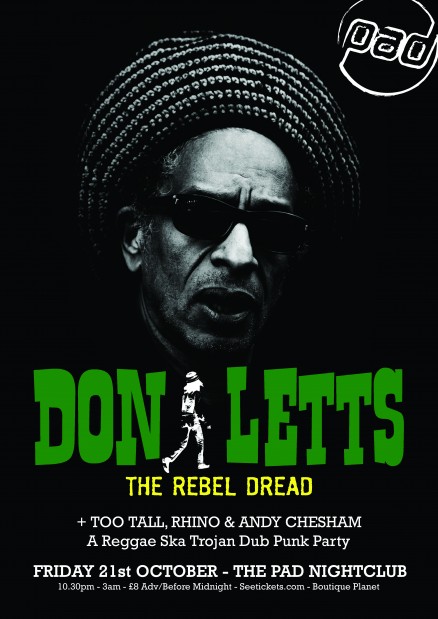 We are pleased to finally bring in a DJ that we’ve been trying to snare for many, many years – The legendary Don Letts is coming to The Pad on Friday 21st October!

Grammy award winner, film maker, Radio 6 DJ, music producer, Big Audio Dynamite founding member and quite simply one of the most influential figures in the UK music scene, Don Letts has been a main stay since his early days of filming videos for The Clash.

These days, Don is one of the most listened to DJs on Radio 6 with his ‘Cluture Clash Radio’ show, and says of his live sets ‘I play for the crowd, party Reggae for party people’. Expect nothing less when he takes to the decks at The Pad.

Tickets are £8 advance / before midnight, available from  Seetickets online and Boutique Planet and Marios Hair Design in person.  Doors: 10.30pm – 3am