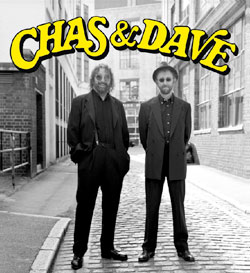 Dave has decided to come out of retirement due to demand by their fans. The show will be the whole history of CHAS & DAVE.
The first half of 30 minutes duration will consist of CHAS & DAVE’S pub set ending with Gertcha in 1979 – the start of their success. The second half will feature all their hits since then.

Chas & Dave began writing and performing songs together in 1972, having been friends since the early sixties.

They reached the top twenty in 1979 with Gertcha, which became a nationwide catchphrase. This was followed by The Sideboard Song (GOT MY BEER IN THE SIDEBOARD HERE). In 1980 they hit the charts with Rabbit, which reached No. 8 in the charts and a No. 2 record in 1982 Ain’t no pleasing you. This was followed by further hits Margate, & London Girls. In 1986 they had a top six record with Snooker Loopy.

They have also written title songs for TV shows Till Death Do Us Part and Only Fools & Horses.

Chas ‘n’ Dave are great musicians and know how to give an audience a good time. They have gained a cult audience of both young and old and due to public demand they are about to be seen together on stage once more.