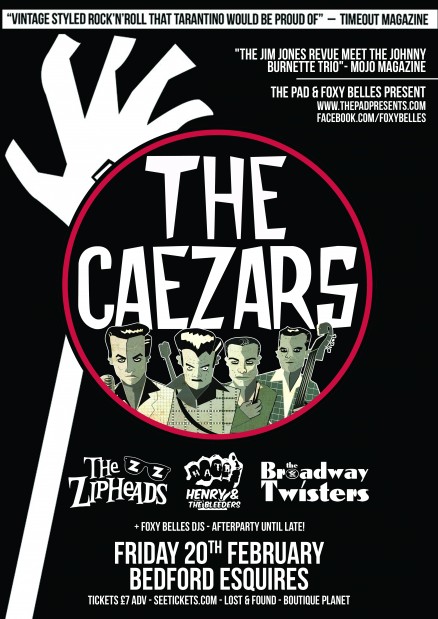 + Henry and the Bleeders + The Zipheads + The Broadway Twisters

We’re very proud to have teamed up with the guys behind Foxy Belles to bring you an evening of Rockerbilly and Rock & Roll, with a twist of Punk thrown in for good measure, headlining this event we have the undeniable force of The Caezars – The great new hope of the Rockerbilly scene, and one of the finest new live bands you’ll see – Recently they The Caezars have toured as main support for Imelda May, playing huge shows across Europe in November and December.

As well as a cracking headline act the support bil for the evening features a cracking good line up, on the night we have Henry and the Bleeders, The Zipheads AND  The Broadway Twisters all making an appearance, one hell of a strong line up for a Friday in mid February!

FOXY BELLES DJ’S ARE PUTTING ON AN AFTERSHOW IN HOLY MOLYS UNTIL LATE TOO!!