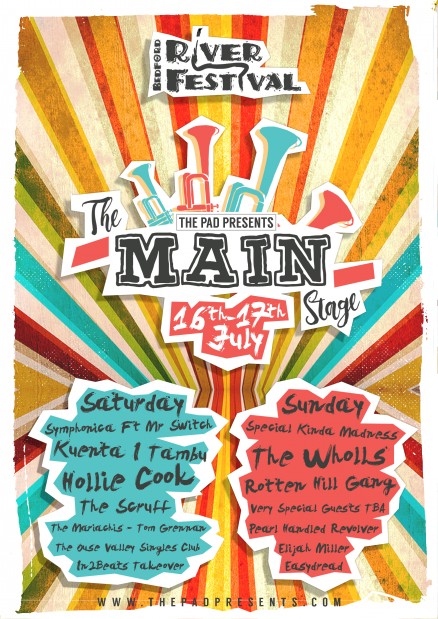 The Pad Presents have been asked to curate the Main Stage at Bedford River Festival 2016 taking place in Russell Park on Saturday 16th and Sunday 17th July.

The Bedford River Festival is held biennially in Bedford on the banks of the River Great Ouse. The festival was founded in 1978 to celebrate the completion of a navigable route by water between Bedford and the coast, and is always held in July.

The Festival has several events and attractions over the two days, usually including bands on the main stage, 2 community stages and an acoustic stage, a road parade, boat shows/races, a raft race for local teams and an evening firework display. Along with the normal attractions of the funfair, the River Festival also hosts the sports village where local sports clubs can come and demonstrate their wares.

The 2014 Festival attracted in excess of 350,000 visitors over the weekend being notable as the second largest free outdoor event after the Notting Hill Carnival.

Continuing the tradition of bringing the finest bands to Bedford, The Pad Presents will be booking the main stage on both the Saturday and Sunday. The aim will be to get some of the hottest new bands on the bill, mixed with some more leftfield artists that need to be seen, but still creating a programme that will suit all tastes. Earlier on the days there will still be the council run community bits and bobs, but come 2pm (ish), the stage is going to be Padified.

2pm – The Ouse Valley Singles Club: ‘New Wave Comedy Skiffle’ Kicks off The Pad Presents stint at Bedford River Festival with one of our favourite local acts, with songs about the River Ouse, Global warming and strange ladies in Bedford town centre on a night out the trio of Tim, Amy and Uncle Sam have quickly built up a cult following from Bedford to the shores of The Wash and beyond.

3pm – Tom Grennan: Local lad Tom recently signed to Sony Records and is being geared up to be one of the biggest names in UK music.. Expect tales of everyday life from the former Jebs frontman with the golden voice. Already clocking up so sold out solo shows, supporting The Libertines earlier in the year he features as guest vocalist the forthcoming new ‘Chase and Status’ single no less, catch him around various major UK festivals this summer Including T- In The Park as well as on his home turf right here, right now..

4pm – The Mariachis: Yes, it’s them off that Doritos advert! Bringing the fun factor early on in the day the band play versions of pop classics with a Mexican twist that include the Human League’s ‘Don’t You Want Me’, East 17′s ‘Stay Another Day’ and Joan Jett’s ‘I Love Rock & Roll’, they have the whole country singing and partying along.In 2014 they headlined the Avalon Stage at the Glastonbury Festival and have become the ‘go to’ band for UK TV shows requiring a Mariachi band, with performances on The One Show, Good Morning Britain, A Question of Sport, Let’s Do Lunch, A League of Their Own, Graham Norton, Paul O’Grady, Sunday Morning Live, Peter Andre and Sunday Brunch.Enjoy with a beer in your hand and a smile on your face and don’t forget your dips…

5pm – The Scruff: One of Bedford’s finest bands, The Scruff are a four piece that sit somewhere between Supergrass and The Jam, recently championed on Radio 1 by Hue Stephens the bands profile continues to grow. The lads are gearing up to a big release in September, make sure you catch their energetic show at 5pm.

6pm – Intobeats takeover: The local underground FM radio station are giving The Pad team a break for an hour and showcasing some of their finest DJs and talents. We’re not 100% sure what they are going to be doing, but expect it to be good!

7pm – Hollie Cook: We are extremely excited about this one! 7pm heralds in the evening triple headline threat, and we start off with the amazing Hollie Cook! The daughter of a Sex Pistol Hollie comes from a stable of musical genius and brings her Reggae tinged ‘Tropical Pop’ to the main stage. Recently Hollie has been performing in a new line up of The Slits, as well as being chosen as one of the main supports for the Stone Roses come back shows. Her extensive work with Prince Fatty on her own material has seen her appear on Later… with Jools Holland and tour extensively – Make sure you don’t miss her! One of our favourites of the weekend we hope you enjoy it as much as we do

8pm – Kuenta I Tambu:  The finest party band in the world, driving over for the day all the way from Amsterdam,  Kuenta I Tambu  are a 5 piece band with a difference – Inspired by Traditional Afro Caribbean Music from Curaçao and European Dance, Kuenta i Tambu has created a brand new sound! They cleverly found a balance between electronic sound samples, singing and chanting and the infectious rhythms played by ritual tambú drums.   We have been lucky enough to catch these guys twice recently and can guarantee if you’re not moving and smiling by the end of the set, you need to check your pulse and call an ambulance..

9pm – Symphonica Ft Mr Switch: The headliner on Saturday night will be like nothing you have ever seen before, when 20 piece orchestra Symphonica take to the stage with World DMC (DJ) Champion Mr Switch! With only a handful of shows under their belts, this is an exciting new project taken on by Mr Switch, blending the worlds of classical music, Hip Hop and underground dance together, creating something to make your hairs stand on end, and a fitting finish before the fireworks light up Russell Park.

1pm – Easydread: The Pad Presents takeover starts again at 1pm on the Sunday, and we ease into the day with Easydread, bringing their own take on Dub and Reggae with full on horn section thrown in for good measure!Already playing to packed houses locally their infectious sound is gaining ground around the UK and London town as a bona-fide act to keep your eyes out for..

2pm – Elijah Miller: A young talent that is hard to ignore, Elijah has released a couple of sold out EPs over the last 12 months, with sell out shows at Esquires. Crafting perfect indie/electro pop with the use of loop pedals, make sure you catch him at 2pm.

3pm – Pearl Handled Revolver: Having just released their critically acclaimed new album ‘If The Devil Cast His Net’, PHR are a four piece that take particular solace from the engulfing vibes of Tom Waits, the hypotonic edgy groove of the Doors, and the leftfield modern guile and drive of Queens Of The Stone Age.

4pm – Very Special Guests: We couldn’t give everything away could we? We will be announcing the secret guests via our Facebook page on the day – Keep up to date at facebook.com/thepadpresents or www.thepadpresents.com

Fusing movie soundtracks such as Scarface and Once Upon A Time in America with classic rock ‘n’ roll guitar-riffs backed with gritty hip hop vocals courtesy of MC Reds and complimented by the sultry tones of Hollie Cook of the Slits and Hayley Smith the band sought to create a sound that was original, compelling, and definitely addictive. Band members also include a rhythm section from Big Audio Dynamite and Transvision Vamp and Gus Robertson from Razorlight on guitar completing the set.

The band describe themselves as playing “Dickensian hip hop” telling “stories as putrid as decaying vegetables at the end of a day in Portobello Road market” We say if you love Public Enemy, The Clash, The Streets and Jimi Hendrix tinged with dub Reggae and soul then this is the band you need to discover…

6pm – The Wholls – Do these guys need an introduction? Probably one of biggest bands from Bedford town these boys are having a busy year touring up and down the UK taking in small club to huge festivals such as Isle Of Wight, Bestival, Secret Garden Party, Great Escape.  Their single X21 was play-listed by Radio 1 earlier this year and was even performed on Miss World in China by the band, a performance that was seen by 25 million viewers globally and has found them winning over new fans far and wide.   The new slimmed down line up of Tordy, Sanfino, Jo and Dan have seen the bands sound beefed up with a rockier stance and look soon to take their band to the next level.

7pm – Special Kinda Madness: Rounding off the music for the weekend we move onto our Sunday headline act, and it’s two of the nations most loved bands under one moniker, half The Specials, half Madness, 100% party – The guys are selling out venues across the UK performing all the ska classics that have stood the test of time with passion vigour such so we can’t really imagine more fun could be had on a (hopefully) sunny Sunday in July.