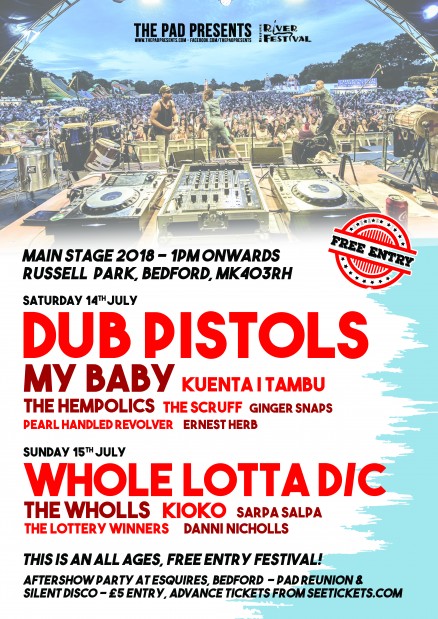 Danni Nicholls: 1pm – 1.35pm
Bedford songstress Danni Nicholls is our first artist to open up Sunday’s proceedings. Danni has the wind in her sails from receiving two consecutive Americana Music Association UK award nominations (2017 UK Album of the Year for Mockingbird Lane and 2018 UK Artist of the Year), the singer/songwriter is currently in the midst of writing a third album. UNCUT magazine described her as “Sumptuous”, with Q Magazine describing the album as “Smoky soul, folk-pop and heart-wrenching alt-country, all in a rich voice”. A melting pot of Americana, Roots and Alt-Country, she’s a very talented lady, make sure you catch her at 1pm.

Sarpa Salpa: 2pm – 2.30pm
Look out for this next lot, as they’re reaching for the stars and have all the necessary equipment get there. The Northants 4 piece released an absolute gem of a debut single earlier this year called ‘She Never Lies’ and are garnering lots of attention at the moment. Sarpa Salpa’s influences range from Tame Impala, Everything Everything, Foals The Beatles – They’re a hungry, young Indie Pop band inspired by deep wave sounds with unexpected changes and hidden meanings. Make sure you catch them.

The Lottery Winners: 3pm – 3.45pm
A sunshine band for a (hopefully) sunshine day, The Lottery Winners will leave you grinning from ear to ear with their infectious Indie-Pop! The band have been selling out mid sized venues up and down the country on their last couple of tours, and were so good when they supported We Are Scientists for us earlier this year that we had to get them onto the line up.

Kioko: 4.15pm – 5pm
The perfect band to lead us into the Sunday evening and one of the finest new Reggae bands in the UK right now, Kioko are playing many major festivals this summer and have played shows for The Pad Presents a couple of times in the last 18 months. A mixture of laid back, beer sipping head nodders and full on energetic, horn blasting party tunes, the band are comparable to early UB40 mixed with with Jamaican Ska and Trojan sounds.

The Wholls: 5.30pm – 6.15pm
The Wholls return to Bedford as part of their summer tour that sees the band slay festivals and club shows up and down the country and over into Europe. This is the only full band showso far this year so this will be a real treat to their huge fanbase in their hometown

Whole Lotta DC: 6.45pm – 8pm
Here are your Sunday headliners, so sit back, with a beer, in the sun, and rock out, because at the end of the day (and the festival) it’s all a bit of fun. Whole Lotta DC are the World’s finest tribute to the greatest Rock & Roll band of all time AC/DC! The band will be kicking out some serious riffs to close the event, with a back catalogue of some of the biggest tracks ever written to choose from, we couldn’t think of a better way to leave Russel Park for another couple of years (pyrotechnics possibly included)…