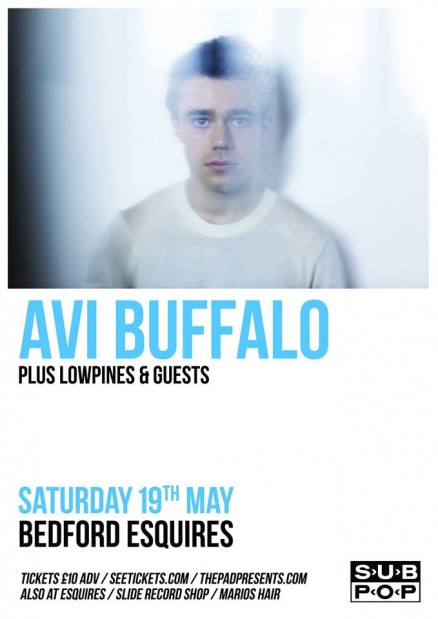 We are very pleased to be bringing Sub Pop’s Avi Buffalo to Bedford Esquires on Saturday 19th May, with support from Lowpines!

Ah, yes, age—much was made of it when Avi Buffalo’s first album hit the ground running, and for good reason: While their Millikan High School classmates were preoccupied with quaint and youthful pursuits, the musicians behind Avi Buffalo were busy making an off-kilter pop gem that eventually bowled over NME, The AV Club, Pitchfork, the BBC, and numerous other outlets on both sides of the Atlantic whose tastes are respected by the general public. Like a lot of kids their age, the Buffaloes celebrated the end of high school in Europe, but instead of visiting the Louvre and Buckingham Palace, their overseas journeys took them to the festival stages of Reading, Leeds, Glastonbury, the Pavement-curated All Tomorrow’s Parties in Minehead, and beyond.