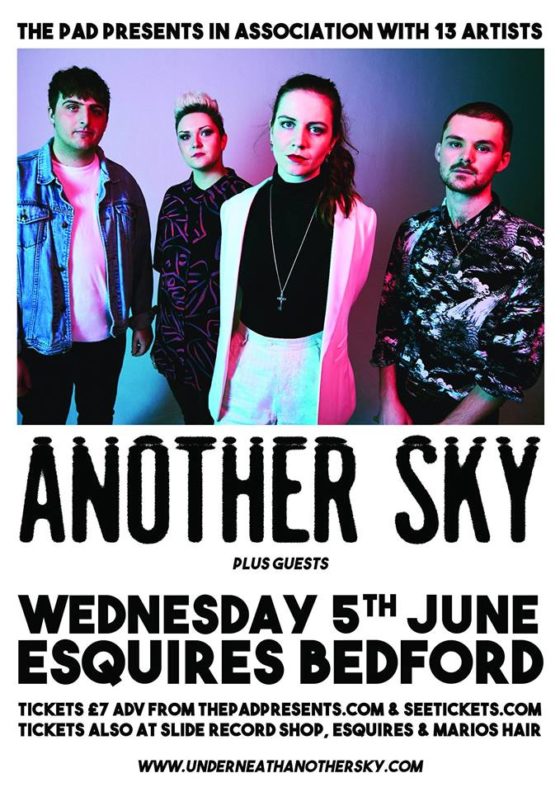 SUNDAY 6TH OCTOBER 7.30PM – *TICKETS FROM THE 5TH JUNE REMAIN VALID OR PICK UP A REFUND AT THE POINT OF PURCHASE*

We’re pleased to announce that Another Sky will be coming to Esquires in June. Ever since we saw their jaw dropping Jools Holland performance at the end of 2018, we’ve wanted to book these guys in, so we’re dead pleased to have snared a show on their upcoming UK tour.

When you listen to Another Sky, it’s probably Catrin Vincent’s voice that’ll catch your attention first. It is a weapon – peculiar, androgynous, lurching and defiant – that she wields to beautiful, evocative effect. When Guardian music critic Caroline Sullivan saw the band perform at The Great Escape this year, she tweeted, “I’m almost dumbstruck by the singer – she has the strangest, most haunting voice I’ve heard in ages.” Catrin is delighted that people find it so strange. “A lot of people think I’m a man,” she laughs. “I think people are embarrassed when they initially think it’s one of the guys singing, but I love it. It’s like I’ve got two voices – there’s this soft, whispery voice that can go really high, and then suddenly there’s this angry chest voice. Somewhere along the way, I drew two voices together.”

Catrin’s unusual vocals certainly caught the attention of her future bandmates – drummer Max, bassist Naomi and guitarist Jack ¬– when they were studying music together at Goldsmiths University. Before they came together to form Another Sky (which is named after an Emily Dickinson poem), “we were all just drifting,” says Catrin. But as soon as they found each other, something clicked. “We started by jamming, and songs would come out of just hours of jamming. Then I would put the melody and lyrics down. It’s really collaborative, no-one’s really in charge. I think that’s the best thing about it.”

Their varied but complimentary tastes helped create their inimitable sound. Max was inspired by electronic artists such as Four Tet and Bonobo; Naomi’s bass lines were influenced by Mutemath and Radiohead; Jack drew from bands like Coldplay and Talk Talk, and Catrin most connected to storytellers like Joni Mitchell. When they rehearsed, they would do so in total darkness. “The studio was on the main New Cross road, where ambulances and police cars go past all the time, and there was this really high window. You’d be in total silence and darkness, but there’d be blue lights flashing past. It was a gorgeous, atmospheric environment.” Until recently, they performed in darkness too. “I think it was just to place the focus completely on the music,” says Catrin, “so it wasn’t this spectacle of me being the singer at the front. We wanted to be anonymous, and just make it all about the music.” Now, they’re willing to let themselves be a little more visible – they’re no longer anonymous, and they show themselves on stage, albeit in silhouette – but that darkness still firmly resides in the music.

Channelling the brooding atmospherics of Radiohead and The xx, but with a little more bite and political charge, Another Sky’s music is dark, cinematic and richly textured. Layering ambient guitars with penetrating bass lines and anxious beats, there is a thrillingly haunting quality to it. “We found it quite hard to strike the balance between hope and darkness at first,” admits Catrin, “because when I came to uni I was in such a bad way that, particularly lyrically, everything was really dark.”

As a child growing up in a small, middle class, right-wing town in the midlands, Catrin felt “like a complete outcast. I was super eccentric, super weird. It was a really homophobic and racist environment, and I was just that person who was like, ‘Actually, you’re wrong.’ I was bullied. I had a calendar of the days left till the end of school for like five years.” Music was an escape for Catrin. She’d listen to Tracy Chapman (another artist whose voice doesn’t adhere to gender norms) and spend every lunchtime in the school’s music room, practising the piano, rather than hanging out with her peers. That practice served her well, of course, but “I’ve had to learn how to be sociable. It hasn’t come naturally. I think I’m a hugely empathetic person, but I didn’t know how to…” Suddenly, she catches herself. “You know what? I’m not gonna blame myself. It wasn’t my fault.”

That’s Catrin’s defiant streak talking – a defiance that is inextricably woven into Another Sky’s music. Particularly the band’s new single, Avalanche, a brooding, biting indictment of toxic masculinity, with an eerily cascading guitar riff and jagged beat. “When you hold them to account,” Catrin chants, furiously, “they’ll spit you out, just a bad taste in their mouth.” “It’s about toxic masculinity bleeding into every other oppression,” she explains. “I had just read about another police shooting, and I was just so angry. The police force is predominantly male. You give people badges that say they’re untouchable and morally right, but then who holds them accountable?” When writing the song ¬– one of the few she wrote almost entirely by herself – Catrin was also thinking about several friends who had been sexually assaulted. “I know so many stories of my friends reporting being raped and just not being helped at all. How demoralising, to have the courage to speak out, and then for the police to be like, ‘Well, we can’t help you.’ The song is trying to tie all oppression together. There’s this disbelief around women, and a taught violence around men, making them feel like they can’t be emotionally vulnerable, and then this anger builds up and damages everything.”

“They’re strangers, they’re in Hollywood, they’re your neighbours you left back in your childhood,” sings Catrin at the song’s close. “It’s kind of saying, ‘Look around you, and care, because these aren’t just isolated incidents.’ Why does every woman I ever speak to have a story of violence or harassment? Why is it normal? Men haven’t been taught to take on emotional labour and accept that they can hurt people.”

Politics is important to Catrin in her daily life, and she doesn’t see why it shouldn’t infiltrate the music too. Chillers In The Villas, a woozy, sarcastic pop song, lambasts those in privileged positions who choose to do nothing – “Why worry ‘bout the weather or nuclear weapons when you can eat for free on a black card at Nandos?” – while Brave Face is a tribute to female strength in the face of abuse. Following in the footsteps of her heroes – Margaret Atwood, Frida Kahlo, Kate Tempest, and her mother, who’s worked as a social worker and counsellor – Catrin wants to use her art to make a difference in the world.

“I just don’t like apathy,” she says simply. “I don’t like the idea that artists shouldn’t talk about politics – politics bleeds into everyone’s lives. I don’t see why you can’t be an activist and an artist. Of course you can change things. The world is what we make of it.”

Tickets are £7 advance from Seetickets and on sale now from our local outlets of Slide Record Store, Mario’s Hair Design & Esquires Bar.