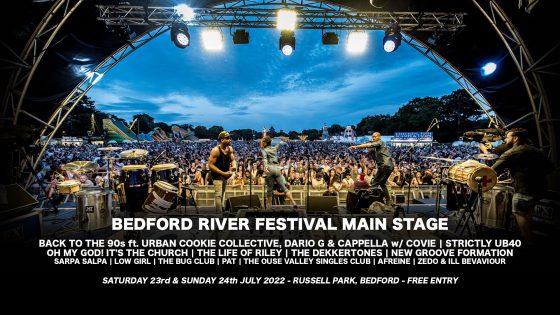 Ending the River Festival program with a top quality tribute has become somewhat of a tradition and this year is no different, with the excellent Strictly UB40 headlining on Sunday. The band do what they say on the tin, with renditions of some of the finest songs ever written by one of Britain’s best loved Reggae bands. Expect them to tear through UB40’s back catalogue, including ‘One In Ten’, ‘Red Red Wine’, ‘Kingston Town’ and many more.

Having formed in Bedford in 1991, The Life Of Riley are one of Bedford’s best loved bands and still going strong after over 30 years! The band are a full throttle nod to Irish folk music and dance along shanties and somewhat unbelievably, make their first ever appearance on the River Festival main stage. Bring your dancing shoes.  Despite gigging for 33 years this is the first time the band have ever played the Main Stage, should be a good one !

Recently reformed and as brilliant as ever, we are very pleased to be welcoming Bedford’s own 8 piece ‘NGF’ back to the River Festival stage for the first time in nearly a decade! Imagine an infinitely loopier Madness, or The Specials but turbo charged and you get somewhere near NGF. New Groove Formation are a pile driving collision of funk, punk, ska soul and rock n roll. Prepare yourselves for a whole new blitzkrieg bop.

Exciting Alt-Pop newcomers, Low Girl will be playing a stripped back set on Sunday afternoon. The band have been going from strength to strength since the release of their BBC 6music playlisted debut ‘Big Now’, with recent single ‘So Cool’ gaining national attention as BBC Radio 1 Track Of The Week. Low Girl have performed at Reading & Leeds festivals, as well as a recent return from SXSW in Austin. Described as ‘Alt-Pop that’s good for your soul’, they’re simply an unmissable part of the Sunday line up.

Bedford MC, Zedo has been a mainstay on the local music scene for some time now. He brings his new, live Hip Hop project Zedo & Ill Behaviour to the main stage, featuring some of Bedford’s most accomplished musicians in tow. Expect a chilled out, more jazzy edge to Hip Hop, taking inspiration from the likes of Guru’s Jazzmataz albums.

Kicking off the Sunday afternoon program, we welcome Afreine – a Neo-Soul, Jazz colossus from just over the Bedfordshire border. Afreine writes deeply from the experience of her childhood, heartbreak, and the natural drama that comes from a small-town music scene. She is a voice representing the queer, BAME, and single parent community and is known for a soulful, yet delicate voice.

DJ2COMBATSTRESS is a team of DJs performing across the country raising money for mental health charities Combat Stress and PTSD Resolution.

We’d love you to help save a life, by giving a donation, following our journey or sharing your story!

Exciting women’s a cappella chorus opening up the Sunday morning.