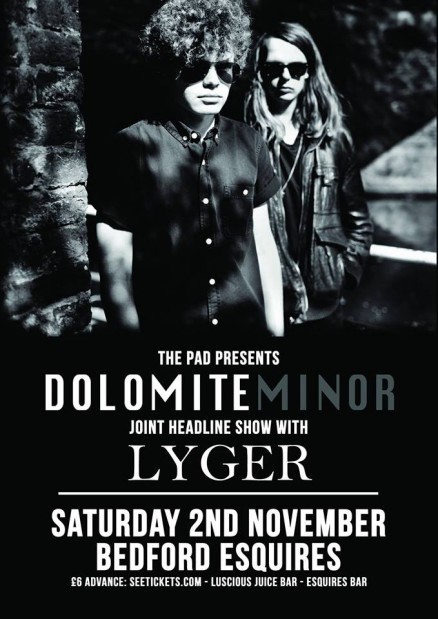 We’re dead chuffed to be bringing Dolomite Minor back to Bedford after their show supporting Ash back in July at Bedford Corn Exchange. The duo looked barely out of nappies, but what followed was a master class in blues laden, sleazy rock & roll that left us speechless. These are the kind of sweaty, head banging, tobacco stained riffs that make you chug your beer in one and throw the empty cup on the ﬂoor just so you can raise your ﬁst in appreciation!

Bands of this knockout calibre come around very rarely, for a new outﬁt these guys can shred at a level that puts more veteran bands to shame.

“They’ve gorged on the rarities of Kurt Cobain and Led Zeppelin amongst others. Singer Joe Grimshaw is a true dead-eyed soul with a killer voice to boot.” NME

Joint headliners are London based newcomers LYGER, who combine the raw, no-frills sound of early 90’s alternative rock with melancholy lyrics and haunting melodies. Taking the best bits of grunge, stoner and punk and filtering them through English ears, LYGER present a new and powerful sound, yet one that holds true to tradition. With raucous and passionate shows, they leave audiences broken and dazed in a feedback and percussion induced trance.

The band – Simon Stark (guitar/lead vocals), Rich Leeds (bass/backing vocals) and Andy Thompson (drums/backing vocals) have been playing in bands together since their teenage years in Ealing, West London and only now in 2013 have joined forces. Expect fuzz bomb guitars, soul-shaking bass lines, monolithic drums and the rare sound of enduring triple-harmonies aplenty. This band are truly essential.

Tickets are £6 advance and on sale now: