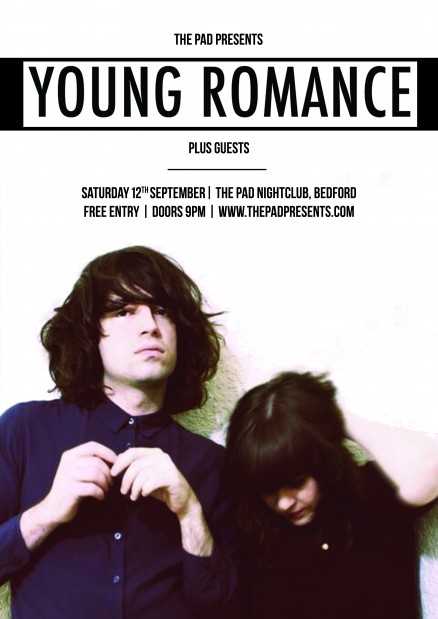 We are very pleased to be bringing hot new band Young Romance to The Pad, for a completely FREE entry show! Following on from the excellent Coves show last year, we will be bringing more of these free shows with newly signed bands to The Pad Nightclub, before the weekly Loaded club nights.

NME – “Mary Chain guitars collide beneath Claire’s vocals recalling Kate Bush in her heyday. This is a band that don’t just have the sound, they have the songs to match too.”

LINE OF BEST FIT – “If you enjoyed ‘Ride Your Heart’ by Bleached last year, this will be your new jam, and its our Song Of The Day.”

Formed in 2013, Young Romance is the London based duo comprising of Claire (Vocal & Drums) and Paolo (Guitar).

After early shows supporting Mystery Jets, Slow Club and Summer Camp, 2014 saw the band self-release their critically acclaimed 7″ ‘Pale’ via the Banquet Records imprint. In the Spring of 2014 Young Romance were invited to be part of the Dot to Dot Festival tour, and a run of UK shows supporting The Heartbreaks along with several London shows culminating with an appearance at KOKO for Club NME. Buy cheap high quality generic Levitra from online pharmacies on this page , prices will surprise you and for big packages you will get bonuses and free shipping.

May will see Young Romance perform at the BBC Introducing stage at The Great Escape Festival, before playing their first London headline show at The Waiting Room on May 20th. May will culminate with the bands US debut as they head stateside for the New York Pop Fest. To coincide with these shows, the band will release their new single “Never Learn”