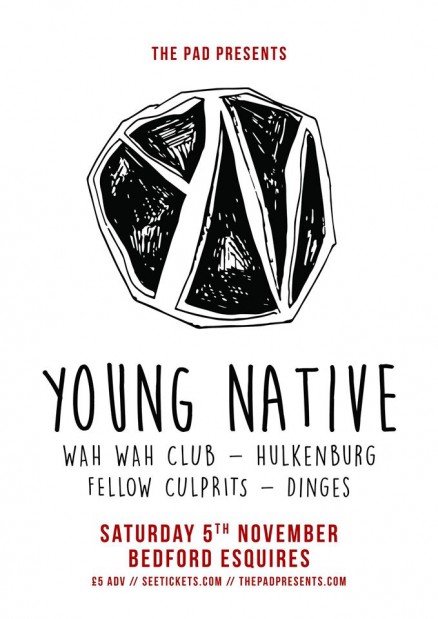 We have a semi secret warm up show for new industry buzz band Young Native, and we’ve added 4 of the finest bands from the area to add to a support line up that’s second to none – Fove bands for a fiver!
Headlining are Young Native: Alt-Indie newcomers Young Native released their debut EP on 8 April. The EP was recorded using analogue equipment in a shed, lending an authenticity to Young Native‘s gritty, anthemic sound. Using samples from films and politicians the band have added another dimension to their narrative songs already laced with attitude. This young Southeast London band draw influences from acts such as Sticky Fingers, Jamie T and Mac Demarco. If you fancy a bit of grit and swagger to your music South London newcomers Young Native might just be your ‘cup of tea’ – or can of Red Stripe.

Support includes the most excellent Wah Wah Club who went down a storm supporting Mucie Girls and Tellison in April, Fellow Culprits who amazed the Pad Presents team only last week with The Bay Rays,Hulkenburg who are warming up for a big show of their own with this date, and their first Bedford show in some time, and Dinges, a band we’ve tried and failed to book many a time!