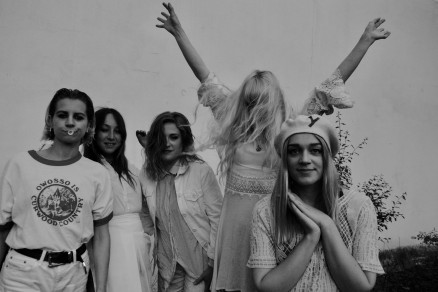 “Yassassin strike upon alt-rock gold” – The Line of Best Fit

Somewhere between Elastica and a bath-tub full of glitter” – DIY
“Barbed riffs and keenly cast observations, like the younger sisters of Elastica’s Justine Frischmann” – So Young

After releasing their debut EP Vitamin Y, London fivesome Yassassin are excited to announce their firstsingle of the year ‘ Citizen’. Built to spark c-o-n-v-e-r-s-a-t-i-o-n and at the same time teasing a hi-hat heavy indie disco beat amongst rousing harmonies, Yassassin tick every alt box (whilst also thinking outside it and
then unticking it again) with ‘Citizen’.

Whilst touring with PINS as well as supporting Deap Valley, The Garden and YAK since their last release, Yassassin have welcomed Stephanie Anderson (Bruising) and Nathalia Bruno (DRIFT) to their blistering new rhythm section. “‘Citizen’ has been an ever-evolving song that went through a huge re-jig when Steph and Nat joined the band”, Yassassin explain. “I guess it’s about realising that as messed up as our world is, there are still so many people who care and get themselves involved in fighting injustices. It really gives you
hope. It’s important for young people to speak up, demonstrate, to get involved politically if that’s your thing, to write songs, make art.”

Premiering with So Young Magazine, ‘Citizen’ is the first teaser of new material recorded with Richard James and Euan Hinshelwood (Meilyr Jones, TOY, Emmy the Great) to come from Yassassin this year. “We played live to tape in order to capture more of an essence of the live shows”, the band explain on the recording process. “It heightened our senses and sharpened us up in a way that worked to get a better sounding record – leaving in those errors adds to the magic.”

Tickets are £7 adv, on sale now from Seetickets.com: