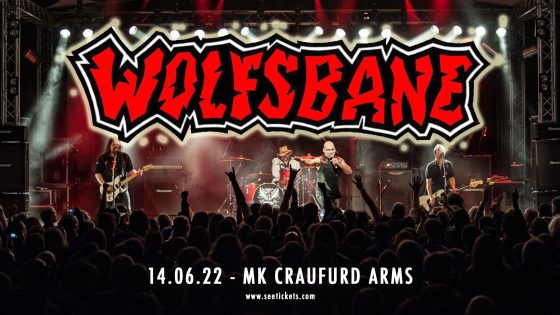 The Facts….
Are Wolfsbane still together? YES
(1984-1993 then reformed in 2007 to the present day)
Is it the original lineup? YES 100%
BLAZE BAYLEY – VOCALS
JASE EDWARDS – GUITAR
JEFF HATELEY – BASS
STEVE DANGER – DRUMS
The band were formed by schoolmates Jeff Hateley and Jase Edwards in 1984. Joined later by Blaze Bayley and Steve Danger, Wolfsbane was born with a mission to form the greatest band in Tamworth. With Steve came a van!!! Now WOLFSBANE had a van… and they were on the move! Tamworth was not enough. Nowhere near enough!!
After refining their sound and look Wolfsbane were poured onto the British music scene like some kind of alcohol and adrenaline fuelled monster !
They were quickly signed by Rick Rubin to his new Def American label and ‘Live Fast Die Fast’ was recorded at THE Sound City in Los Angeles.
Brendan O’Brein took over the producer’∂s chair and the critically acclaimed ‘All Hells Breaking Loose Down At Little Kathy Wilsons Place’ was born!
Next came a series of headline tours and big support slots with Alice Cooper, Motorhead, Guns n Roses (in America) and a UK wide tour with Iron Maiden.
After recording the MASSIVE NOISE INJECTION live album at a sold out Marquee. They went back into the studio to record a 3rd studio album Down Fall The Good Guys. Recorded at ABBEY ROAD London with Brendan back at the helm as producer Then another sold out headline tour and the release of the ‘Ezy’ single
After parting with Def American through mutual consent in the form of a broken clause in their contract, WOLFSBANE were free to sign with the newly resurrected BRONZE RECORDS and Pete Winkleman.
The recording of their next album with Producer Simon Effemy was underway and it was time to mix this new masterpiece when the news reached the rest of the band that Blaze had joined IRON MAIDEN.
FAST FORWARD 16yrs.….WOLFSBANE reformed!! and an EP ironically titled ‘Did It For The Money’ showed the band had not lost their sense of fun. With a sold-out and heaving show at the BORDERLINE London they were asked to be special guests by SAXON on their ‘Call To Arms’ tour.
In the years they’d been apart guitarist Jase Edwards had become a successful record producer working with some well known bands. He produced the band’s most recent album ‘WOLFSBANE SAVE THE WORLD’ which was reviewed as probably the band’s finest album. Several headline tours followed with appearances at HARD ROCK HELL, LEGENDS OF ROCK and headline slots on the second stage at BLOODSTOCK and the TAMWORTH ROCK FESTIVAL.
Things are going very well for WOLFSBANE. The band love it!! They do it because they LOVE it and best of all its a lot of FUN!!!. There has never been a better time to go and see WOLFSBANE.