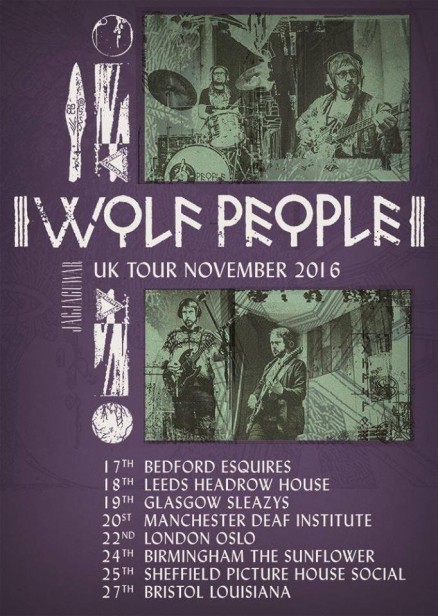 We are very pleased to be welcoming Wolf People Wolf out of their slumber, and back to Bedford Esquires Bedford on Thursday 17th November as part of an intimate venue tour to showcase some of their new material (keep the eyes peeled)..

Wolf People have been mining a rich seam of ‘beardo wizard shit’ for a few years now, earning a fervent following from discerning record collectors, heads and folkies alike with an ever evolving alchemistic compendium of English rock. Honest, raw, loud, or at times mesmerizingly fragile, the music of Wolf People comes with no connotation other than the volumes of psych-rock history it illuminates, scrambles and refracts in their mysterious songs.

With the release in 2013 of their critically acclaimed Fain LP and their first North American tour with Jagjaguwar label-mates Unknown Mortal Orchestra, Wolf People have cemented their reputation as a unique and formidable psych rock band with the ability to enthral and hypnotise record buyers and audiences alike. They have gigged extensively over the last few years, including shows with Tame Impala, Mudhoney, Dungen, Black Mountain, Unknown Mortal Orchestra, Dinosaur Jr, Tinariwen, Witchcraft, Malcolm Mooney and Besnard Lakes, nurturing a reputation for blistering and immersive live performances. The Portland Mercury recently described them as “one of the best rock bands in the world” following their performance at legendary Pickathon festival in Oregon. Currently preparing a new full length LP, Wolf People have made a recent switch to shorter, heavier material whilst still expanding on the deeply mined English lyrics, intertwining necromancer guitars and brutal arctic-truck rhythm section of previous records Fain and Steeple. The next LP, to be released in 2016 will reflect their ferociously dynamic live shows with more direct, less ethereal songs, favouring hard and heavy riffs with hailstorms of guitar noise and drum fills.