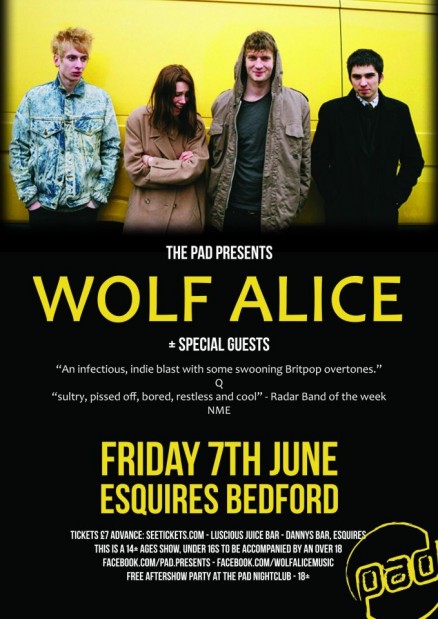 The Pad bring you another fine young band that seem to be on the tip of every tongue right now – WOLF ALICE. We could go on for ages about how great these guys are, but we only get given so many characters when we write these event pages – for more, see any of the current music press, including a huge piece in this weeks NME.

‘Fluffy’, the band’s recent single, was received to rapturous acclaim, finding Wolf Alice touted as one of the finest acts around today. Founded on its gloriously twisted take on rock and backed by the touching ‘White Leather’ on its flipside, the band found themselves topping the Hype Machine charts, in BBC Radio One sessions with Huw Stephens and championed by magazines such as NME, The Fly and Clash as one of the ones to watch for 2013.

With the release of ‘Bros’ around this new run of dates, soon the joyfully infectious nature of all things Wolf Alice will be impossible to ignore.

“When Wolf Alice played in London recently, every band and their dog rocked up to see them. I’m crushing hard as well after ‘Fluffy’ – a slice of pissed-off slacker-rock punctured by frontwoman Ellie’s Elastica nonchalance. “I’m not looking for no love affair,” she sings. “I’d sell you my soul just to get me somewhere”.
NME

“An infectious, indie blast with some swooning Britpop overtones.”
Q

“While the previous single was a strung out number primed for lengthy road trips and evenings alone, this new offering gives a more vivid insight into what we can expect from the group as they look to take 2013 by storm. ‘Fluffy’ is ferocity defined; a side to Wolf Alice we’ve yet to see bloom in such dramatic style, up to now.”
Neu Magazine

Tickets are £7 advance and on sale now from:
http://www.seetickets.com/event/wolf-alice/bedford-esquires/704589