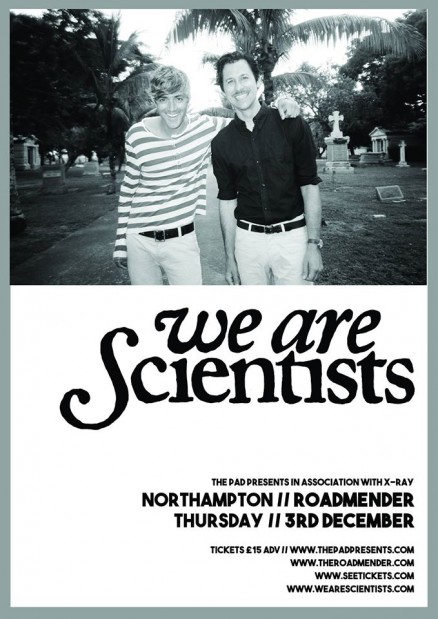 We Are Scientists + guests

THE PAD PRESENTS
www.thepadpresents.com
WE ARE SCIENTISTS + guests
Thursday 3rd December
Roadmender, Northampton
NYC indie rockers We Are Scientists ar coming to Northampton Roadmender on Thursday 3rd December, as part of their UK tour!Now five albums in, and with ex Razorlight man Andy Burrows on percussion, WAS are a tighter band than ever before, and with more hits than you can shake a stick at.Having broke through in 2002 with debut ‘Safety, Fun, and Learning (In That Order)’, the band really came to the fore of the rock scene with the release of ‘With Love and Squalor’, an album that has spawned some huge indie dancefloor hits. Singles ‘It’s A Hit’, ‘Nobody Move, Nobody Get Hurt’ and ‘The Great Escape’ we all big hitters in the U…K, and the band were quickly becoming firm NME favourites off the back of tours with Arctic Monkeys and Hot Hot Heat.The three studio albums that have since followed, 2008’s ‘Brain Thrust Mastery’, 2010’s ‘Barbara’, and 2014’s ‘TV En Francais’ have further cemented the bands position on one of the UK’s favourite American exports, and we’re very pleased to be bringing them to Northampton as part of this tour.————

Tickets are £15adv – On Sale from 9am, Friday 23rd October from: http://www.seetickets.com/event/we-are-scientists/roadmender/919422

Supports to be confirmed