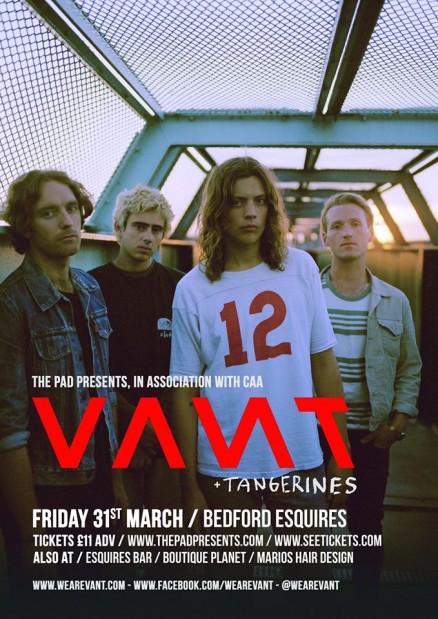 We have an absolute beast of a line up coming to town on Friday 31st March!

VANT are coming back to Esquires for a special festival warm up show, having absolutely destroyed room two just over 18 months ago at the start of their journey. We also have a very special support added too, Pad Presents, Roar and Club Biscuit band of The Great Escape 2016, Tangerines are on support duties – This is frontrunner for gig of 2017 here!

VANT aren’t just a band, they’re a war cry. A statement, a revolt, the new generation’s charge to the socio-political barricades. As much as their music demands moshpit bedlam, their lyrics demand discussion, on Syria, environmentalism, sexual assault, inequality, racism, religion, social media isolation, and the all-out self-destruction of mankind.  Make no mistake, Vant vent. “Every time we play a show it’s a form of activism, a form of protest,” says singer and centrepoint Mattie Vant. “I wanted to do something that means something that could have a positive impact. For me, rock music has always gone hand in hand with making a stand, being at the forefront of a movement and trying to change the world.” This band just might…

Tickets are on sale right now from Seetickets and the regular outlets of Esquires Bar, Planet Boutique & Marios Hair Design – Advance tickets highly advised for this one.