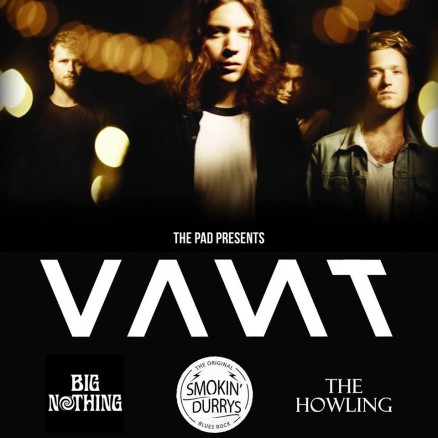 We are very pleased to announce that VANT have added Bedford to their run of tour dates in November.

One of the hottest new bands in the UK right now, VANT will be playing the intimate Holy Molys, room 2 at Esquires.

Fronted by charismatic vocalist/guitarist Mattie Vant and completed by Henry Eastham (guitars/ vocals), Billy Morris (bass) and Martin Söderin (drums), VANT have been compared to The Pixies with echoes of Queens of the Stone Age, yet frontman Mattie Vant takes influences from a vast spectrum of musical genres which are then all condensed into two-and-a-half minute onslaught.

Born out of frustration at the world, he built an arsenal of songs that are short, poignant and socially aware remedies to the ignorance of the most modern consumerist pop music. What started as a solo project quickly evolved into the fully formed quartet who released their debut single ‘Parasite’ in March and have now signed to Parlophone. Described as a cross between The Kinks and the Pixies, they have since been named BBC Radio 6 Music’s ‘Record of the Week’ while Zane Lowe loved ‘Parasite’ so much, he played it three times in just one show. Buy Viagra online from by US licensed pharmacies.

Support comes from Smokin’ Durrys + Big Nothing + The Howling

Tickets are just £5 adv for this show, on sale now here:…