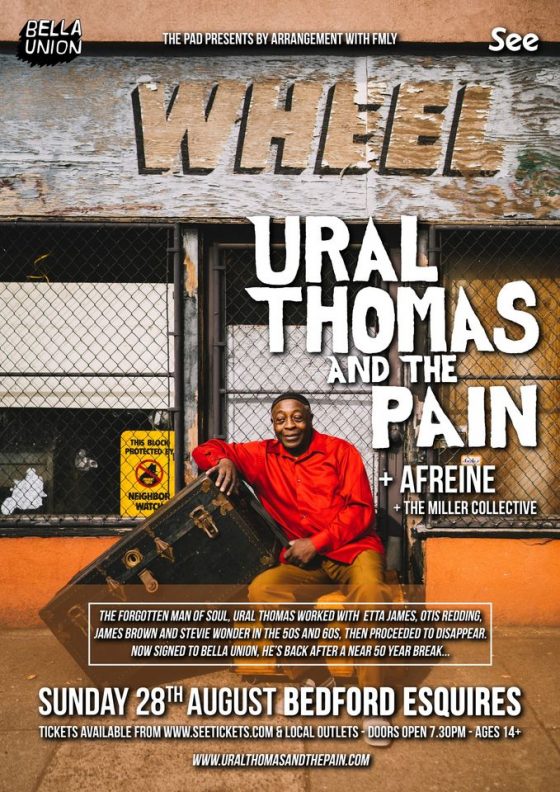 Universally recognized as one of the most exciting singers remaining from the original soul era, 82 year-old Ural Thomas and his band The Pain released their third LP “Dancing Dimensions.” On the uber cool Brighton Based ‘Bella Union’ records earlier this year.

Thomas initially made his name in the 1960s with stone cold soul classic releases like “Pain Is The Name of Your Game,” “Can You Dig It,” “Deep Soul,” and his 1964 recording debut with The Monterays “Push – Em Up.”

After a musical journey that commenced in his native Portland, Oregon, and led to Los Angeles, Cincinnati, and New York, sharing stages with everyone from James Brown to Stevie Wonder to Otis Redding to Etta James, Thomas became disillusioned with the music business and returned home to the city of roses at the end of the decade – where he continues to reign as Portland’s uncontested Soul Brother Number One.

In 2014 Ural met drummer/bandleader Scott Magee at a Sunday jam session he’d been hosting for decades and Ural Thomas and The Pain was born. The full showband set to work, prolifically gigging, touring the world, and releasing four critically acclaimed records (two LPs and two singles) between 2015 and 2018. Despite the usual COVID-19 obstacles, The Pain finally completed their much-anticipated third album in 2021.  While “Dancing Dimensions” explores everything from sweet Chicago soul to airy West Coast psychedelia to Sly funk, their latest collection retains the distinctive sound this well-oiled tightly-knit musical aggregation organically developed over years of relentless work. Classic yet unmistakably contemporary at the same time, “Dancing Dimensions” is the most accurate representation of The Pain’s unique flavor, power, and musical breadth committed to vinyl thus far.

Guest support comes from Afreine.  Birthed from a gospel background has a style heavily influence by blues and soul with a modern pop edge. Accompanied with jazz and blues musicians her music is open to all with heartfelt lyrics written from her life experiences.

Having not had the easiest journey, Afreine takes inspiration from strong women in blues such as Etta James to connect with the audience and perform. Often performing as a trio, her versatile style has recently been winning crowds over around the UK on a prestigious support tour with James Taylor Quartet and recently landed a slot at the annual Bedford River Festival.

Seamlessly keeping the night together will be the sounds of The Miller Collective who will be spinning the best in funk and soul cuts.

Given the logistics of getting Ural over from the States this is probably a one-off chance to catch him live at Esquires so if you like what you hear please grab a ticket and let’s give Portland’s Soul Brother a massive welcome to Bedford.

Tickets are on sale now priced £15 from Seetickets online and in person from Tuesday 2nd August from Slide Record Shop and Esquires Bar.