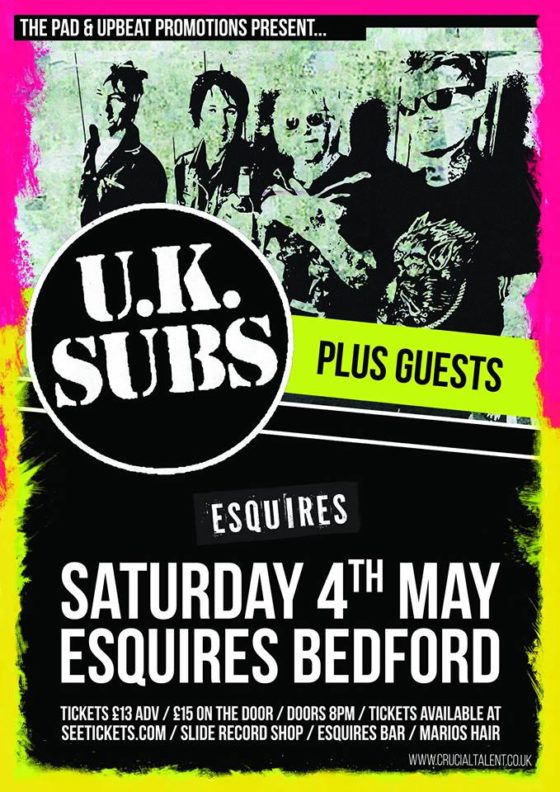 On Saturday 4th May, we are pleased to welcome the return of UK Subs to Bedford Esquires!

A British Punk institution, the bands regularly sell out across shows across the globe and come to us as part of their UK tour.

Their style combined the energy of punk and the rock and roll edge of the then thriving pub rock scene. The band had hit singles such as “Stranglehold”, “Warhead”, “Teenage”, and “Tomorrow’s Girls”, with several of their songs managing to enter the United Kingdom’s Top Forty.

The band played several John Peel sessions in 1977 and 1978 for BBC Radio 1, and played some opening gigs for The Police, and recorded a set at The Roxy (a punk club), which was issued in 1980 as Live Kicks. They signed a recording contract with GEM Records in May 1979.Under GEM, the U.K. Subs recorded their most successful studio albums, Another Kind of Blues and Brand New Age. Their biggest selling album came with 1980s Crash Course. Crash Course was recorded at the Rainbow Theatre in London on 30 May 1980 during the Brand New Age tour.

In 1979 Julien Temple wrote and directed a short film Punk Can Take It, a parody of wartime documentaries,that consisted mainly of the U.K.Subs playing live on stage.The film was released theatrically.

In the 1980s with the addition of the new bassist Alvin Gibbs and drummer Steve Roberts, the songs took on a more heavy metal-influenced edge. In July 1982, they became the first western band to perform in Poland since the imposition of martial law, and the suppression of the trade union, Solidarity. Their concert was held in Gdańsk, and they were supported by Brygada Kryzys. Also in 1983 they came to Poland, where they played several concerts with new wave polish band Republika. In 1991, the U.K. Subs also had Lars Frederiksen (now of Rancid) on guitar for a 30 date UK tour. Decades after the disbanding of other late-1970s punk groups such as the Sex Pistols and The Clash, the U.K. Subs continue to perform.

Successive U.K. Subs album titles start with consecutive letters of the alphabet, and the band announced on 24 October 2015 via their Facebook page, that the 26th album starting with the letter “Z” would be their last long playing record, although they would continue to release EPs. The band intend to fund the final album through Crowdfunding site Pledge Music, the official start date for their pledge campaign is 1 November 2015. The U.K. Subs song “Down on the Farm” was covered by Guns N’ Roses on their 1993 covers album “The Spaghetti Incident?”. The U.K. Subs joined the bill for the 2006 Fiend Fest. The band have toured with The Misfits, The Adicts, Osaka Popstar, Agent Orange, and The Ramones.[citation needed] The U.K. Subs song “Warhead” is played in the movie, This Is England. U.K. Subs are one of the regular bands to play the Rebellion Festival nearly every year since its origins as The Holidays In The Sun Festival in 1996.

In 2007, drummer Jamie Oliver was a contestant on the UK quiz show Nothing But the Truth. Vocalist Charlie Harper was among the panel of witnesses. Oliver reached the £5000 mark, but lost it all in a bid to double his winnings.

In recent years, the band’s work has been critical of British politician Nick Clegg, with the 2013 song Coalition Government Blues describing the Liberal Democrats’ leader as “liking his perks”. The band’s 2015 album Yellow Leader was widely suspected of referring to Clegg, with yellow being the official colour of his political party.

Guest support comes from The Bleach Boys – Formed in Hitchin late 1976 and were originally known as The Fur Coughs. They were the first punk band to emerge from the north Hertfordshire area. Over the years they’ve gained notoriety for their controversial, tongue in cheek humour and in your face live performances. Their first single ‘Chloroform’ released in 1978 was featured in Record Collectors top 50 punk singles of all time. With 50% of the original members remaining, the band continue release new records and play in the UK and Europe. its been said many times that they are ‘punks best kept secret’. Check out new 7” vinyl ‘No Moral fibre (Whatsoever)’ out now on No Front Teeth Records