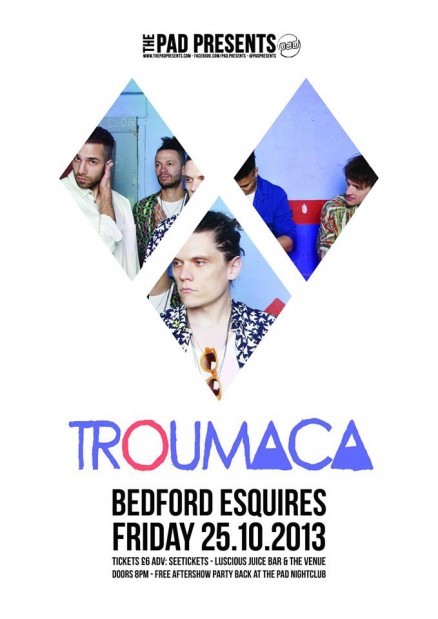 Essentially a bedroom album, homemade sketches were the bedrock of The Grace, morphed into full-blown songs at the band’s own womb-like studio, where vivid, kaleidoscopic prints adorn the walls, tucked away in Birmingham city centre. Following in the footsteps of their local forefathers Steel Pulse and UB40, the West Indian connection within Troumaca is strong. The small town on the island of Saint Vincent, home to guitarist Geoff’s family, gave the band their name: “Troumaca is our muse. The musical and familial heritage transport us to our own world.”

The relationship with the homeland runs deep, from the gentle ring of steel pans on Gold, Women & Wine to the warm sub bass that permeates the record from beginning to end. It was those frequencies that first resonated with school friends Sam Baylis, Geoff Foulkes and Jim Nayak who delved into garage and house music with gusto: “We hung out, did the usual teenage thing and got stoned and jammed together,” says Geoff. Joined by kindred spirits Tom Gregory and Matt Duke, the circle was complete: “We all enjoy the same music, we go to the same raves in Brum. The musical affinity has always been there.”

Troumaca helped put Birmingham back on the musical map in 2012 with a string of sold out shows and their self-released free download The Gems EP. They signed to Brownswood Recordings later that year, releasing their debut for the label, Virgin Island EP in February 2013. Already favourites of media as diverse as NTS and NME, French music mag Les Inrocktibles and BBC 6Music’s Lauren Laverne, the breadth of support for Troumaca is testament to their individuality and innate ability to conjure unique and original left-leaning pop.

———————
We will be announcing supports for this show very soon