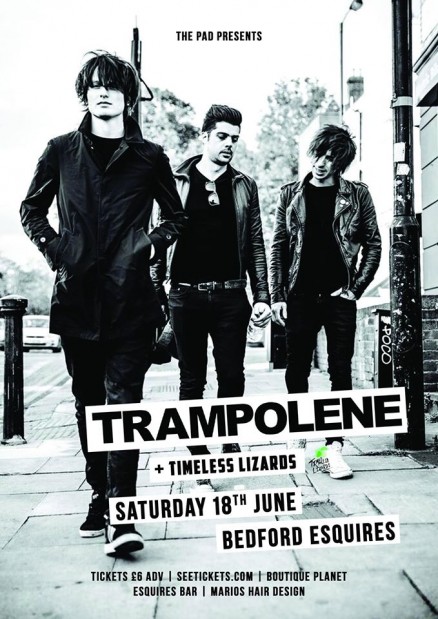 To celebrate Tom Hardy’s nomination at this year’s Oscars, rising Welsh rock stars TRAMPOLENE released a new single, on Friday 26th February, Entitled ‘Tom Hardy’ – The song is a hilarious paean to a mythical star’s mind-boggling achievements and was inspired by the idle boasts of singer Jack Jones’ school friend in Swansea… and it rocks like a bastard!

The single, which was recorded live at Konk studios and mixed by Cenzo Townshend (Florence & The Machine/The Maccabees), is available as a free download from: https://www.musicglue.com/trampolene/ orlisten here:https://youtu.be/K-aEPxHabyg

TRAMPOLENE singer Jack Jones was personally invited by Peter Doherty and Carl Barat of The Libertines to perform on their sell-out Arena tour in January.Jack performed two of his extraordinary poems ‘Ketamine’and ‘Pound Land’then welcomed the Libertines to the stage in front of 20,000 baying fans, an experience the Swansea dole queue daydreamer will not forget in a hurry. TRAMPOLENE completed a highly successful Friday-night-residency at Koko/Club NME last summer. They toured continuously throughout 2015 with stand out support slots with the Buzzcocks, Reverend & The Makers, The Enemy and Carl Barat & The Jackals and played at the Glastonbury and Isle Of Wight Festivals.Singer Jack Jones also made spoken word appearances at The Great Escape and the Stoke Newington Literary Festival.

———– Jones has a kind of raw, unpolished talent that appears in a Liam Gallagher-esque sneer and swagger, backed by squealing guitar riffs -The Independent  “The sort ofband that people tend to say they don’t make anymore, the sort that gets music fans of a certain genusand generation very misty-eyed indeed.”- The Guardian Earthy rock n’ roll met with Pete Doherty approved John Cooper Clarke-esque poetry about the pitfalls of rock n’roll and finding the extraordinary in the ordinary. Indie has a newposter boy – GigWise ———–

We have possibly our favourite new local band supporting n this one, but we can’t announce it yet as they play a show for us in April – All will be revealed soon!

Tickets are on sale now at a silly £6 advance from seetickets and available locally from the usual outlets.