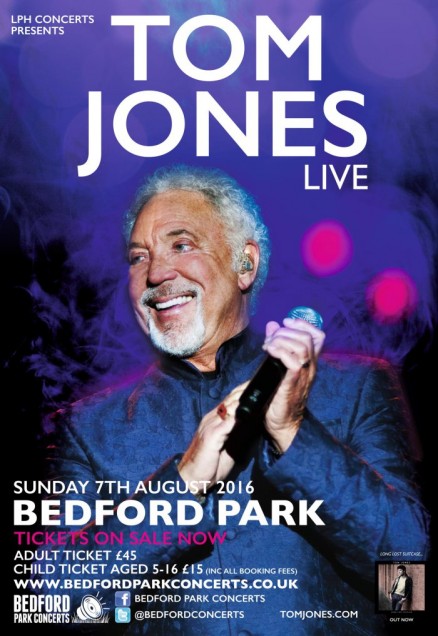 With a career that has spanned more than half a century and with more than 100 million record sales generated by hits such as ‘It’s Not Unusual’,’ Kiss’, ‘Delilah’ and ‘What’s New Pussycat’, Tom Jones along with his band are set to entertain Bedford with a repertoire that spans five decades.

Tom Jones has won many accolades including a BRIT Award for Outstanding Contribution to Music and a Silver Clef Award for Lifetime Achievement. Knighted in 2006, the global star has amassed 36 top 40 UK hits. His irresistible show traverses musical eras and genres, appeals to young and old, male and female, mainstream and cutting edge.

Tom has always been about the power of the voice, the power of the song – Tom is indeed a living legend, one of the few musical artists whose profession began at the dawn of modern popular music who continues to have a vital recording and performing career to this day.

Supported by The Shires Warming the crowd up and returning to their home county will be very special guests The Shires. The duo of Ben Earle and Crissie Rhodes are one of the hottest country influenced acts right now. Hailing from Bedfordshire and Hertfordshire, The Shires are set to warm up the Bedford crowd and open the show for what will be an electric night of fantastic music from not only one of the greatest entertainers in the world but some home grown talent too!