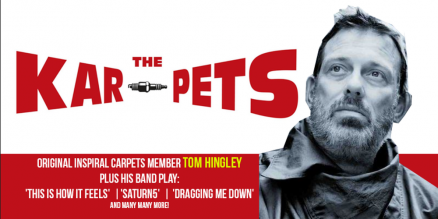 Alongside their Manchester counterparts Happy Mondays, Stone Roses & 808 State, Inspiral Carpets were part of Madchester movement & remained well loved to this day. Tom Hingley is taking the songs back he performed on and taking them back out on the road with his full band The Kar-pets reproducing that original sound that shot the band to fame for this very special gig.

Tom sang on all the Inspiral Carpets chart hits and singles including This is How it Feels, Saturn Five, Dragging Me Down, Joe, find out Why, commercial rain, two Worlds Collide, Bitches Brew, I Want You, She Comes in the Fall and all the songs on the bands four Major label albums – Life (1990) The Beast Inside (1991) Revenge of the Goldfish (1992) and Devilhopping (1994) Tom also fronted the band when they headlined the Reading Festival in 1991.

Formed in 2016, The Karpets have played barnstorming sets at Shine On Weekender, Embrace’s Secret Festival , Readipop Festival, Vicars Picnic, Rochdale Live, Darwen Live, Festival Too & headline sets at the over thirty other UK clubs to date.

Tom Hingley & The Kar-pets play all of Inspiral Carpets Greatest Hits as well as a selection of albums tracks obscure B-sides and fan favourites. The live experience is raw, dynamic, punky & energetic. The band play like their very existence depends on it with humour, skill and volume.

Tickets priced £14 are on sale now from Seetickets and will be available in person (booking fee free) from Esquires Bar, Slide Record Store & Marios Hair Design from Monday 5th February.