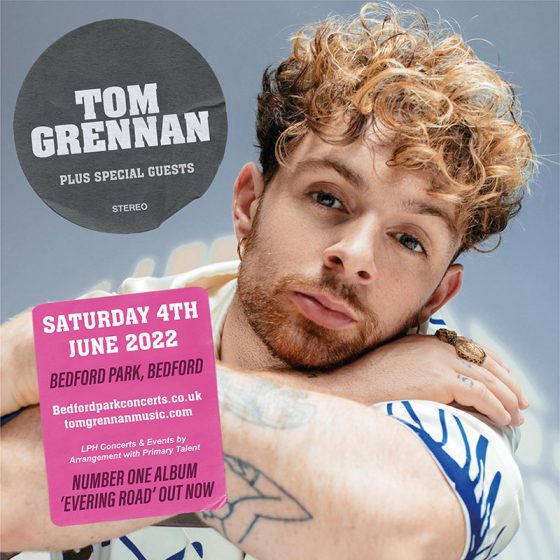 Tom Grennan’s success has been closely followed by his hometown Bedford fans, and on
Saturday 4 June, he will headline his first major outdoor concert in Bedford Park!

Tom Grennan comments
“Bedford I’m coming for you! I am so excited to be headlining back
in my home town!!!! Home is where the heart is and I’m going to give you all the love and energy I can. I can’t wait to perform live for you, it’s going to be one hell of a party. Big Love!!”

Tom Grennan’s first album, Lighting Matches, was one of the best-selling debut albums of 2018. He rose to fame through his first appearance as the guest vocalist on the Chase and
Status track ‘All Goes Wrong’. His sophomore album ‘Evering Road’ went to the number one spot in March 21 and his single from the album ‘Little Bit of Love’ charted at Number 2 in its
first week and was only prevented from reaching the Number 1 spot, because Grennan’s collaboration with Ella Henderson ‘Let’s Go Home Together’ was at the top spot.
His extensive recent UK tour completely sold out; so Tom decided to put on a handful of intimate shows at Bedford Esquires, the venue that had supported his career right from his teenage years.
They knew that Tom was going to go on and explode into the charts and become one of the hottest singer songwriters in the UK. These shows sold out within a minute of going on sale, so don’t delay on getting your hands on this year’s hottest tickets in town!

“I am delighted that Tom will headline for us in June next year, this seems like an extra special gig, bringing Tom back to his home town, a town I know he loves just as much as we do. We’veworked hard to put Bedford on the map by bringing some of the best live music to town. Tom is incredible live, it’s going to be an amazing night.”