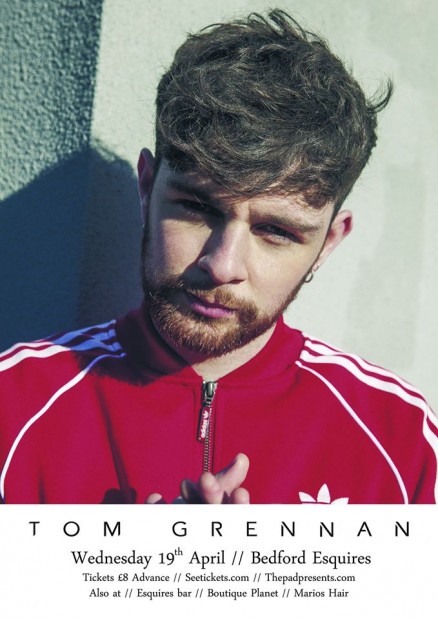 On Wednesday 19th April, our man is returning home, with Tom Grennan coming to headline the main stage at Esquires. We’ve watched Tom grow from his first ever show with his old band at The Bear through to putting him on as recently as last year, and we’re unbelievably proud of everything he is achieving right now. On the eve of his biggest sold out show to date at Union Chapel, he plays a special warm up show where it all started.

Tickets are on sale Wednesday 29th March at 10am – Advance tickets highly advised – On sale here from Seetickets and in person from  Esquires Bar, Boutique Planet, Marios Hair Design.

There are two major things that – in some strange, unlikely way – paved Tom Grennan’s way into music: The Kooks’ 2006 single ‘Seaside’, and an incident that left him hospitalised for several days.

Born and raised in Bedford, the 21-year-old’s childhood was a fairly typical one. He played football, went to school, got a moped at 16 and “was cruising with that for a bit.” Aside from an MP3 player his mate’s brother loaded up with grime, music was never a big part of his life growing up. Until, that is, he had a little too much to drink at a party, and demanded that everyone listen to him performing ‘Seaside’ a cappella. “I was just going around like, ‘Oi, listen to me…’ just being an annoying guy,” he says now – but his performance, bolstered though it may have been by a generous dose of Dutch-courage, was clearly impressive. His friends, unaware before that night that he could even hold a tune, roped him into joining their A Level band, where he discovered an untapped knack for performance.

Without that, he says, there’s no way he would have ended up performing. But it was something altogether more traumatic that prompted Grennan to turn to songwriting. At the age of 18, a group of strangers attacked him on the street. He’s inclined to play the incident off casually – “just wrong place wrong time I think” – but it left its mark, and not just from the metal plates and screws he’ll have in his jaw for the rest of his life. “When that happened,” he recalls, “I was in a mad dark place. It hurt me mentally. I had this build-up of emotions.”

So, without much intention of ever showing anyone, he started writing about it. Influenced by the likes of Ray Charles, Kendrick Lamar and Amy Winehouse, he poured his trauma, his pent-up pain and frustration, into songs, “and then I just found I could escape from it. I just loved doing it, it felt like a weight had been lifted off my shoulders. Now, anytime I feel anything, I write about it.”

The first thing he wrote was Old Songs, which has a cheeky, Jamie T-esque charm to its syncopated storytelling. But it was Something In The Water, the title track from his debut EP, that really showcased Grennan’s gritty, soulful vocals. After a scat-like, staccato verse, it gradually builds up to something rapturous: “I can see the light now, as I’m stepping out the door / Well there’s something in the water, calling my name.” The song, he says, “was like coming out of the dark. I felt sorry for myself for a minute, but I’ve got to just pick myself up.”

With Something In The Water’s success, the ball was well and truly rolling. Next came a Chase & Status collaboration, All Goes Wrong, which might never have seen the light of day were it not for Grennan’s sheer force of will. After a fruitful writing session, the electronic duo were unsure whether or not to release the resulting song. Grennan, with the unabashed self-belief only a 21-year-old could have, told them, “Boys, this is a banger.” He was right, and a spot on the BBC’s Sound of 2017 longlist, as well as a sold-out UK tour, shortly followed. Now, as he prepares to play his biggest headline show to date at London’s Union Chapel in April, there’s no stopping him.

“You only live life once, so you got to make every bit of it count,” he says with an infectious enthusiasm. “I want to put a stamp on my life, and I want to put a stamp on the world. I don’t want to be here to be forgotten. [My music is] fiery, it’s real life and it’s passionate. There’s no bullshit.” The name of his forthcoming EP, Release The Brakes, could hardly be more apt. “I’m full throttle now. My foot is on the accelerator and I’m not braking. I ain’t stopping. Simple.”