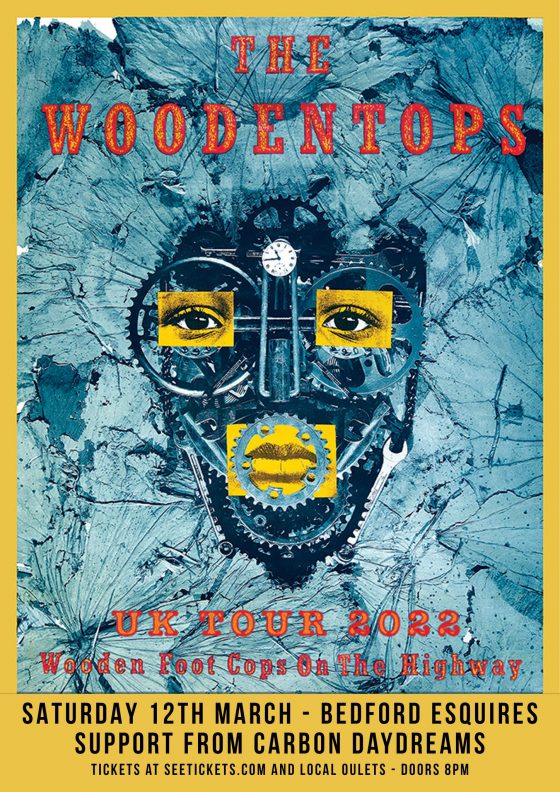 The Woodentops – Saturday 12th March – Bedford Esquires
Taking punk’s D.I.Y. ideals and applying them to stripped-down acoustic pop, the Woodentops achieved a great deal of critical success in the short time they were together. Formed in the early ’80s in Northampton, England, the group consisted of Rolo McGinty (vocals, guitar), Frank de Freitas (bass), Simon Mawby (guitar), Benny Staples (drums), and Alice Thompson (keyboards). The band released its debut single, “Plenty,” on Food Records; the record led to a contract with Rough Trade. Throughout 1985, the Woodentops released a series of singles, all written by McGinty, that began to attract an audience in the U.K. The group released its acclaimed debut album, Giant, in 1986. The following year, the Woodentops began experimenting with their sound, adding tougher guitars and electronics as McGinty became increasingly interesting in dance music. These changes were particularly evident in their live show, as shown by their 1987 live recording, Hypno Beat Live, recording during the group’s American tour. (The tour also introduced new keyboard player Anne Stephenson, formerly of the Communards, who replaced Thompson.) Featuring the contributions of professional studio musicians Bernie Worrell and Doug Wimbish, among others, 1988’s Wooden Foot Cops on the Highway continued the group’s experimentations with rhythmic and sonic textures.
While the Woodentops scored a minor radio hit in Los Angeles with “Stop This Car” and they developed a sizable following in Japan, extensive touring in 1991 and 1992 failed to widen their fan base, and at the end of 1992, the Woodentops broke up. Rolo McGinty worked in electronic music and sang with Gary Lucas’ group Gods & Monsters, while Simon Mawby was briefly a member of the group House of Love. In 2006, McGinty assembled a new lineup of the Woodentops for a reunion tour; joining original members McGinty, Mawby, and de Freitas were drummer Paul Ashby, pianist Richard Thomas, and keyboardist Aine O’Keeffe. The Woodentops played live periodically over the next several years, and in 2014 they returned with their first new album in over 25 years, Granular Tales. ~ Stephen Thomas Erlewine
This tour will see the celebrate the anniversary of the Wooden Foot Cops album.
Tickets on sale now from Seetickets