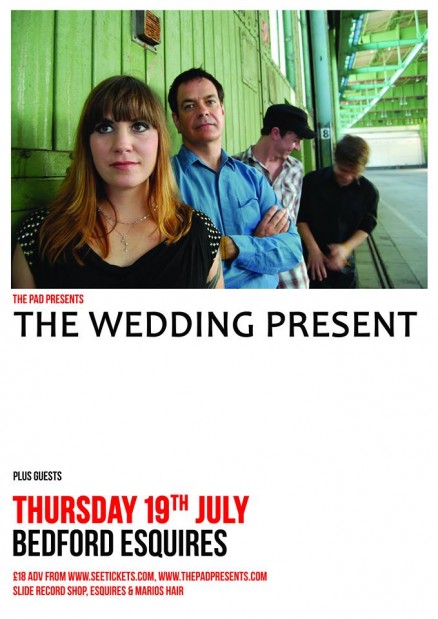 We are very pleased to announce a date at Bedford Esquires with The Wedding Present.  This is the bands 4th visit to Bedford (George & Dragon in 1985 & 1986 & Esquires in 1994) this time for a festival warm up show.

Having formed in Leeds in 1985 around the lovelorn songwriting of David Gedge, the band soon acquired a reputation for bittersweet, breathtakingly honest songs of heartache immersed in whirlwind guitars — a jangly-yet-brawny sound, played at impossibly breakneck speeds, that was introduced to the world on their debut LP George Best.

NME called the album “an unmitigated delight” and subsequently invited The Wedding Present to contribute a track to the magazine’s C86 compilation — a cassette release that has remained hugely influential upon generations of noisy indie rock bands.

Over the course of the next three decades the band would find themselves exploring all kinds of sharp left turns like trying their hand at traditional Eastern European folk music on the album Ukrainski Vistupi V Johna Peela, enlisting the aid of the noise-mongering (and, at that point, relatively unknown) sound engineer Steve Albini for their 1991 album Seamonsters, and the time they released twelve 7” singles, one per month for a whole year — an experiment that paid off when they equalled Elvis Presley’s 35-year-old record for “most hits in one year”!

Today, The Wedding Present can be found at the top of their game — their 2016 album Going, Going… having been described as their masterpiece. AllMusic says “It’s hard to deny the brilliance of a band that can crank out an album as passionate, hook-filled and flat-out fiery as this.”
Tickets are on sale from 10am from Friday 2nd March priced £18 from Seetickets and they can also be picked up in person (booking fee free) from Slide Record Store in the Arcade, Esquires Bar & Mario’s Hair Design in Kempston from Saturday 3rd March.