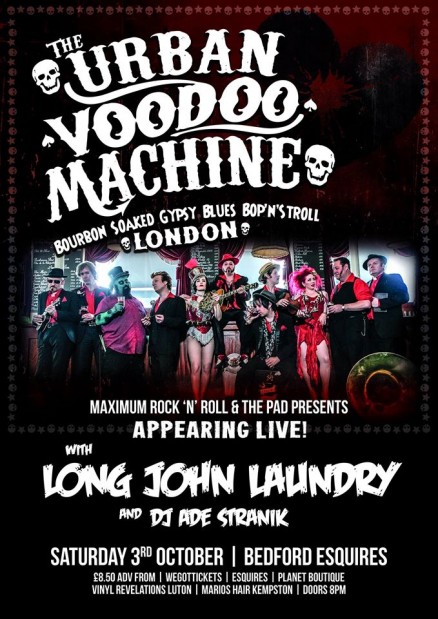 “With their lurching sea shanties, debauched murder ballads, messed-up tangos and whiskey-soaked gypsy stomps, some reckon they’re from the same stable of stallions as Tom Waits and Nick Cave; others point out the last gang in town swagger of The Clash and the hellbound blues that John Lee Hooker first dragged out of the swamp”

The stars were very much aligned the night Paul-Ronney Angel was begged by a promoter to be the filling in a triple-bill band sandwich. Never one to turn down a knees-up, P-R realised he had 48 hours to put a band together. No problem! Trawling the dives and doss houses of London, he called in some favours, cracked some whips and so it was that The Urban Voodoo Machine lurched into life. That was April 2003 and since then, this shadowy, rambunctious troupe of rabblerousing troubadours has been bringing the spirit of the carnie and their now legendary ‘Gypsy Hotel’ nights (famous for the attendance of strippers, fire-eaters, jugglers and sundry degenerates,) to the stages of clubs, festivals and theatres across London, the UK and Europe at large.

In 2008 the Urban Voodoo Machine opened for The Pogues on their American tour after a personal invitation from Spider Stacy, which in turn led to them being offered The Pogues full UK & Ireland X-Mas tour later the same year. The following year saw the release of their debut album ‘Bourbon Soaked Gypsy Blues Bop’N’Stroll’, on Gypsy Hotel Records. The album scored top reviews in all the major music magazines and made ‘Albums of the Year’ lists in Classic Rock and Big Cheese magazines. This was backed with lots of live shows and touring including headlining East London’s prestigious and beautiful Hackney Empire and joining the legendary New York Dolls on their UK tour. Notable live events since then have included prestige shows in Norway, Hungary, Spain, Finland, Holland, Belgium, Portugal, Switzerland, Germany and France. Major festival appearances include Glastonbury, Download, Latitude, Edinburgh, Sziget, Hard Rock Calling alongside Paul McCartney, Bestival, Bulldog Bash and Ukraine Stadium alongside Goran Bregovic and they have performed everywhere from prisons, schools and churches!

Second album ‘In Black’N’Red’, was released to more positive acclaim and hullaballoo from the media in 2011. A collection of rare tracks and early EP sides called ‘Rare Gumbo’ was released to coincide with the bands sell-out 10th anniversary show at London’s historic Leicester Square theatre in June 2013. This was followed late the same year by a double A-sided single ‘Help Me Jesus / Heroin (Has Put My Brothers In The Ground) which featured legendary British guitarist Wilko Johnson.

Support comes from LONG JOHN LAUDRY with guest DJ Adrian Stanik (The Broadway Twisters) spinning the vinyl. Tickets are sale from Danny’s Bar at Esquires priced £8.50 and online from seetickets.

“Drawing deep from a dirty well where Tom Waits, Nick Cave and Dick Dale are enjoying a burlesque all-nighter with Ennio Morricone.”CLASSIC ROCK