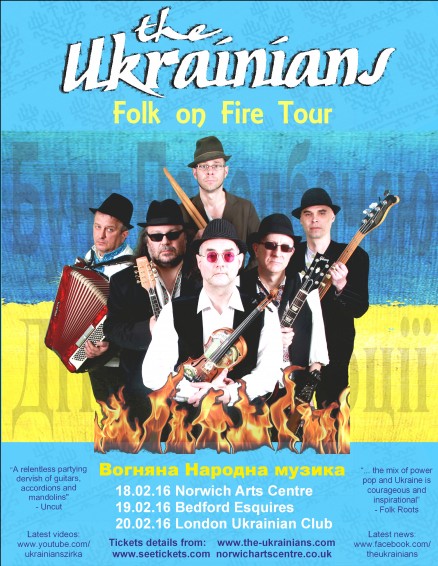 The Ukrainians + Blessem + Get tae Folk

The Ukrainians were founded by ex-Wedding Present guitarist Peter Solowka and his friend Len Liggins in 1991, the very year Ukraine regained its independence from the Soviet Union.

Mixing fast indie rock with Ukrainian folk, this group have performed their unique cultural fusion across the world – over 1000 gigs, 20 countries and 8 albums spanning 25 years.

The music is influenced by east and west. Peter grew up in a small Ukrainian community in the north of England. From an early age he was exposed to the rich musical folk culture of Ukraine – a tradition where history was passed down through music and verse. This practice goes back hundreds of years when songs told tales of resistance to oppression, a longing for freedom, a love of life, and the trauma of war.

In the late 80’s, Peter met Len, a student of Slavonic studies with a love of folk music. Together they played traditional Ukrainian songs and composed their own in a traditional style. Len’s sonorous Ukrainian vocals with Peter’s fast guitar createtd a new style of music which was adopted by Peter’s other band. During this time the Wedding Present were becoming popular, and John Peel commissioned a session of Ukrainian music by TWP. This eventually became an RCA release – “Ukrainski vistupi v ’Ivana Pila” which reached 22 in the national album charts in 1989.

The Ukrainians were formed soon afterwards. Typically, they compose their own songs, but their albums and live shows have a selection of traditional folk songs and covers of western songs in Ukrainian. The music is passionate, and pacey while maintaining the emotions of their Ukrainian roots.

Songs are about a variety of topics, but they often come back to the pull between east and west.

Many of the songs deal with the subject of migration, the heartbreak of leaving family and homeland forever coupled with the excitement of starting a new life. These songs have a strong resonance at a time when waves of young Ukrainians, Poles and other eastern Europeans are moving to the West in the hope of finding work. Songs such as ‘Durak” (madman) deals with issues of excess alcohol consumption, while “Diaspora” deals with the sense of loss felt by people growing up away from their ‘homeland’

The latest tour – ‘Folk on Fire’ – is a compilation of the fastest, energy filled, folk inspired songs that they have produced in the last 25 years. You’ll hear a range of tracks, traditional (some  hundreds of years old) alongside modern western classics, but all fused with Ukrainian roots and passion. A gig by ‘The Ukrainians’ is a truly unique musical event and not to be missed. According reviews at Cialis helps to treat erectile dysfunction.

Tickets on sale priced £10 from Esquires Bar, Planet Boutique in the Arcade and Marios Hair Design in Kempston